Is Rahul Gandhi the last Mughal, the Bahadur Shah Zafar of a dynasty? 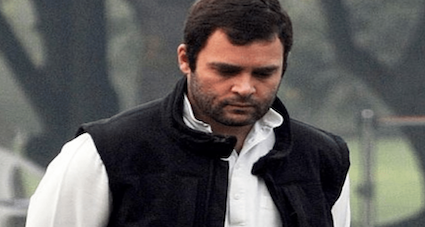 I worry for this India where a rank failure in politics, with no connection to people, and little integrity, is lauded as Messiah every time he opens his mouth.

None of my three points are contestable though you might pick me up on the issue of integrity so let’s first get this out of the way.

Rahul Gandhi talks of conversations when he didn’t attend a single of 11 Parliamentary meeting on defence; was missing altogether in the monsoon session 2020; has taken part in just three debates; and has asked zero questions. But how could he have done any better when his Parliament attendance sheet is nearly half of an average MP’s 80%? What kind of conversation is he walking the talk?

Rahul Gandhi sees a King trying to take over the Union of States so let’s waste an extra minute on the matter:

Between her two tenures, Indira Gandhi dismissed State governments no less than 50 times; and her daughter-in-law got weighed in with a dozen dismissals of her own through Manmohan Singh. Nehru (8) and Rajiv Gandhi (6) too bulldozed this Union of States as almost a genetic make-up of the dynasty.

And who is the King here when throne is passed within a family for blood ties and a manipulated surname? How prepared was a pilot or his wife once was; or our orator or his sister is now? Did they respect the Constitution, Judiciary or Democracy? Didn’t they jail writers, silenced singers and banned books? Did hundreds of riots during their terms is our imagination? Is anyone even now bothered the kind of joke elections are within Congress’ apex body?

This cardboard of a leader is vouching an arrogant Centre is looking to trample the independence of Tamilians. So who pushed for compulsory Hindi in Tamil Nadu in 1965 and 1986? Who ceded Katchathivu to Sri Lanka in 1974? Who insulted, again and again, the great Kamaraj who largely made Tamil Nadu what it is today? How do Sri Lankan Tamilians look at Congress? Who called Jallikattu a “barbaric sport”? And what do we make of Tamil Nadu’s rejection of BJP when the latter has won people’s vote in Puducherry?

Should we let go when he says Nehru was in jail for 15 years when even his own party’s twitter handle mentions it nine years? Do we let go the words of one of his closest associate (Asif Ali) that jail was almost a holiday vacation for Nehru. That he had a bungalow to himself, could have curtains of his choice and a garden  to be in company of humming birds? That he was released on his wife’s sickness even when he hadn’t asked for one? And could Rahul Gandhi tell us why the wife of Nehru’s close friend (Aruna Asaf Ali) was awarded Bharat Ratna within a year of her death whereas someone like Sardar Patel could have one four decades after his demise?

Today, this man who lies from both sides of his mouth, is telling us Pakistan and China were kept apart by his grandpa and granny. So those thousands of kilometres in Kashmir’s mountains were not passed on between the two India’s enemies when Congress was in power. That  China wasn’t helping Pakistan get its atom bomb in the 70s; or the CPEC (China Pakistan Economic Corridor) didn’t begin while Congress was in power; that private dinners with enemies or secret visits to embassies was denied and then accepted by some entity we don’t know about.

Mr Gandhi is right though that it’s impossible to rule one India: That’s why we ceded one-third of India what is today’s Pakistan and Bangladesh.

Indeed, his assertion of Two Indias is right but only partially. There is a Third India too where a political liability is being feted as India’s saviour by a deep state who fattened on his party’s largesse. None of your media or academics or books would hold the mirror. None would tell Rahul Gandhi the tale of a naked emperor. None would tell his lies are a lie.

The Grand Old Party is fighting for its existence. Yet Rahul Gandhi, we are told, has no role on its heaving on ventilator. It’s not an Opposition that a Democracy needs. All those who prop him up don’t have India’s good at heart. All those who whitewash his lies are no friends of poor. India awaits the morning when this long night of its betrayal would end: When it would finally see the Bahadur Shah Zafar of a dynasty.

(Post-script: A random check on Rahul Gandhi’s career made out of lies here).