Johnson was in Gujarat; and so was WHO: Join the dots 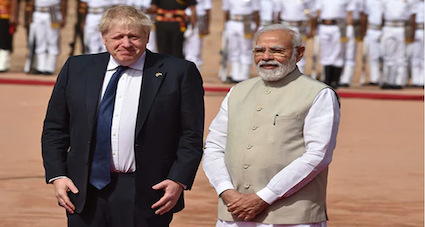 Which is the biggest grey market business in the world, and simultaneously, amongst the biggest legitimate businesses too? The business of opiates, whether derived from the poppy, cannabis or the coca plants. How much do you want to know about them? A good starting point is here –

Which are the world’s biggest growth areas for these plants? If you consider poppy and cannabis, you got it right, the catchment areas are both in and around India. Coca is South America. Yes, new agricultural techniques have made these plants global, but some things like soil and water you can not really replicate. Especially if the end use is medicinal. The true reason for wars in Afghanistan and Far East? Check it out.

Who are the biggest legit consumers of the products from these plants? Think big pharma, globally, controlled by the Big Bad West. If you thought that the Colonials came all the way to Asia, especially India, for indigo, spices and tea, think again. They were and are not dopes. Most of the seafaring parts are easier understood if you hang around with seafarers.

Who, in turn, are running the biggest laundries where the massive profits from the “dope trade” are churned back into the world of money? A nice book to read, or just the synopsis if you don’t have the patience, gives you and me a very good idea of what the Square Mile City of London (as different from Heathrow and Hounslow) really does.

Now, over the last few days, we have seen a few truly important events take place in Delhi, whilst attention was diverted by violent riots in Delhi and their aftermath.

Understand the two events from this simple fact – the legit value add on for the global medicinal opiate industry Codifications and Harmonisations just shifted back to Gujarat. As it used to be before the Mongols, Persians and Colonials enslaved us.

Now, ask yourself, who are impacted the most because of this?

2-Big Pharma with their fancy patents, et all, mostly Western;

Legit opium trade, for whatever purpose, mostly medicinal but also recreational, returns to its traditional roots and routes – through the Gulf of Kutch/Kachchh and the Gulf of Khambat/Cambay: India.

And the value add as well as the banking, also stays in India.