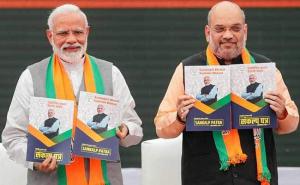 There is one word for BJP Manifesto 2019 polls. Respect.

Even though abrogation of Article 370 has been a part of BJP manifestos in the past, the clear resolve to dump Article 35A shows a party which is willing to take a stand even if it means un-appeasing the Muslim minority.

In the same breath, there is a reason to stand up and applaud BJP for standing firm on NRC and Citizenship Bill – again no mollycoddling the separatist forces in Bengal, Assam and North-East.

Contrast this with Congress, TMC, BSP, SP, TDP, RJD or any other party which speaks of one India and united India but don’t have the guts to take a stand on Omar Abdullah’s despicable statement of a separate Prime Minister (and President) of  Jammu & Kashmir. For if they support Abdullah, it would write its’ own death warrant in 2019 Polls. If it opposes Abdullah, it would mean losing the Muslim votes.

Please also take note of the venom which dynasts Muftis and Abdullahs have spewed in the wake of BJP’s resolve. Mehbooba Mufti tweeted—and her words must be acid to every citizen of India—“Na samjhe gaye to mit jaugo aye Hindustan waalo. Tumhari dastaan tak bhi na hogi daastono mein (If you don’t pay heed you would be wiped out Indians. History books won’t even have your mention).  Farooq Abdullah said “it’s the wish of the god that we get freedom from them.”

(As an aside, it’s been 24 hours since Mehbooba Mufti tweeted so. Have you read these words in any newspaper of Lutyens Media? Aren’t they ashamed and angry? Why this implicit support to “tukde tukde gang”).

These despicable voices speak of existential threat to Kashmiris, as Mahesh Jethmalani  so aptly put, on the basis of two premises: One, that every piece of land of J and K at the time of accession to India is to be protected; two every Kashmiri must stand for rights of other Kashmiris. If it is so, why it never utters a word against Pakistan which has illegally captured a large part of Kashmir since 1947? Why no outrage when Pakistan gives control of Gilgit-Baltistan to China?

In any case, the clear stand of BJP in its manifesto makes it apparent that Article 370 and 35A are up for Constitutional revision. That it’s not cast in stone. No legal hawks and paid editorial writers could dress it up as a Constitutional violation. So far it remained in practice because it suited Congress. They either didn’t have the will or handled separatists with velvet gloves. There was no will to tell Pakistan: Stop exporting terrorism in Jammu & Kashmir.

Now that the threat is real the separatist forces are using language which but for Article 370 and 35A would’ve put them straight behind bars under Sedition laws. But I am thankful for such outpouring of poison: it tells the rest of the country that in the garb of being legitimate political parties and its leaders, these forces actually seek a break-up of India. Please also mark Congress and all other parties of “mahamilavat”: None of them would condemn Omar Abdullah for his “separate-prime minister-for-J&K” remark. Seriously, are you going to vote for parties who would rather have a separate Prime Minister for Jammu & Kashmir???

(Please also keep a watch on their fake protests against the ban to access to Baramullah-Udhampur Highway. Read everything about it here. Already five petitions have been filed in courts. All this has been without a regard if Pulawama 2.0 could happen and a full-fledged war between India-Pakistan could ensue).

India has addressed a few larger issues in blocking the BBC’s documentary “India: The Modi Question” which must make its pro and anti forces...

World Economic Forum: How an NGO loots the humanity

Why we don’t hear a word on fleeing Ukrainians, 9m of them

If Russia is losing the war, why are Ukrainians fleeing?