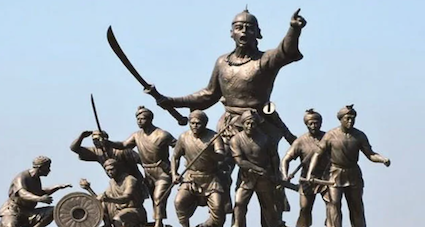 Lachin Bophukan is a legendary figure, commander of the Ahom forces, who took upon the advancing Mughal forces on the banks of river Brahmputra, in a battle remembered in annals as Battle of Saraighat in 1671.

The President also laid the foundation stone for the Alaboi war memorial, as a tribute to soldiers who laid their lives  against the Mughals at Alaboi, two years prior to  Lachit’s decisive victory at the battle of Saraighat in 1671.

Earlier, Assam  Chief Minister Himanta Biswa Sarma had also announced a number of projects   honouring  Lachit Borphukan. Along with the Alaboi war memorial at Dadara, the CM announced construction of  Lachit Samadhi  this year over 22 bighas of land.

Last year  the Prime Minister called 17th century Ahom general Lachin Borphukan a symbol of India’s aatmanirbhar military might.” At a rally in Bokakhat, Modi called Borphukan “one of India’s greatest sons who saved Assam from outside forces with his swadeshi strategy”.

In the run-up to the polls in Assam last year,  the name of this great warrior was frequently invoked.  The opposition parties accused  the ruling BJP of inciting misplaced nationalism.

Earlier, in the election season, actor Vivek Oberoi had announced a biopic on Borphukan.

Lachit Borphukan  is remembered as the greatest military warrior  of Assam. As a General  of the Ahom dynasty he strategically  fought  the Battle of Saraighat on the Brahmaputra, where he beat the Mughals. Says Dr Jahnabi Gogoi, a Dibrugarh University professor who specialises in medieval history: “He was an able commander and his courage is all the more lauded because he was terribly ill during the war.”

According to Arup Kumar Dutta, author of the book The Ahoms, Borphukan represents a time when the “Assamese race was united and able to fight an alien, formidable force such as the Mughals”. “The British reduced a brave race to an abject state,” he says. “Even in free India, we had to fight for everything.” He also represents a hero that Assam can be proud of, like Shivaji represents Marathi pride, says Dr Gogoi.

Lachin Borphukan (24 November 1622 – 25 April 1672) fought against Mughal forces under the command of Ram Singh during Aurangzeb’s regime. Lachit carefully selected the battlefield of Saraighat where river Brahamputra narrows down to just one  kilometre. His strategy was to fight a naval war as Mughals had supremacy in ground battle and water warfare was their Achilles heel.  Though Mughals had 40 ships in their fleet,  Lachit Borphukan  , with a relatively small force, used the navy, with only six ships, synchronising with  army, launched a decisive attack. Despite reinforcements from Bengal and Delhi by Aurangzeb, the Mughals faced reversals and a loss of reputation.  The Mughals had to retreat with major losses. And never again the Mughals could ever annex Assam.

It is considered as one of the greatest naval battles on a river which resulted in the victory of Ahoms over the Mughals.

Lachit Borphukan was the inspiration to Indian defence thinkers . Strengthening India’s naval force, improvising  inland water transport, optimum use of rivers and creating infrastructure associated with it, all come into te planning table due to Borpukan’s great naval strategies.

The eminence of Lachit Borphuka can be assessed by the fact that the best cadet award at National Defence Academy is named The Lachin Borphukan Gold Medal. The medal was instituted in 199 to inspir the personnel to emulate Borphukan’s heroism and sacrifice.

Ahoms worshipped their own tribal gods, yet they accepted the Hindu religion and Assamese language.

Manipur: A poll, not in main discourse; nor is its revered heroine