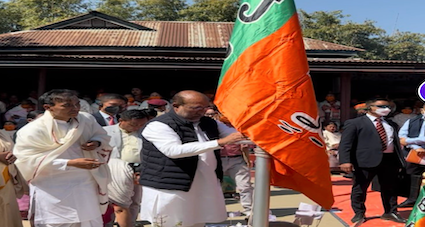 It’s time for assembly polls in Manipur. It’s also time for athenpot thinba, a gift presentation tradition, which more or less tells which way the wind is blowing.

Athenpot Thinba is a centuries-old tradition where agrarian population of Imphal Valley and the surrounding hills gather first for the flag-hoisting ceremony (firal chingkhatpa)  and then present a fair share of their farm produce to the king as a mark of respect.

So Athenpot translates as offerings and Thinba means dropping of offerings.

These days, the King has been replaced by the MPs and MLAs and its a show of strength—the more a candidate could muster the people’s number, more is he positioned—and believed to be—the anointed winner.

It’s no different this time as people offer rice, fruits, flowers, vegetables, honey sweets etc in steel plates and bamboo baskets at the ground where the pole of flag is dug.

Basil (tulsi) is also planted under the flag as a good luck charm. Once all this is done, prayers are held. The most enthralling aspect of this tradition is that it cuts across all religions and caste and creed and the pure spirit of the rituals is followed.

Meiteis, an ethnic native group, kind of have a “copyright” on the tradition since they form about 53% of the state’s population and are said to be the originators of the tradition.

This native group have won many a laurels for the state and the nation and some of the names from this ethnicity—boxer Dingko Singh, weightlifters Kunjarani Devi and Mirabai Chanu,  are well-known as is the present chief minister N. Biren Singh.

Meiteis, who adhere to Vaishnavism and Sanamahi faith, dominate 40 constituencies across the Imphal and Jiribam Valleys.

“People used to share the burden of the one who organised social function. And that practice and somewhat mixed with Meitei traditions are more extended to elections. It is a collective community tradition now,” explained a local leader.

Says Imphal based historian Wangam Somorjit, “The Meiteis, followed  Vaishnavism,   performed  puja at the function. That ritual is still followed and  flags hold a place of importance in religious and political  life in Manipur. The Meiteis, before going to place of worship for prayers, first pray to flag, and that continues.”

With Biren Singh, a Meitei, behind the wheels, the ruling dispensation of Bharatiya Janata Party (BJP), is confident it would have an outright majority in the 60-seat assembly.

Interestingly, the date of ‘Athenpot Thinba’ is selected after astrological consultations. This year February 14 was considered as the auspicious day and many leaders hosted this ceremony.