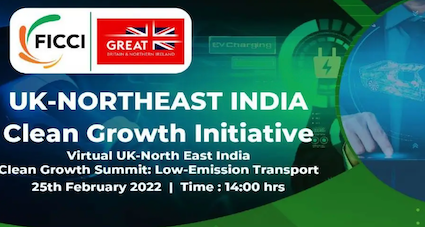 He declared during an online summit namely ‘United Kingdom-Northeast India Clean Growth Summit’  held in collaboration with FICCI, on Friday.

Nick Low was optimistic about both the countries joining hands in promoting climate friendly electric vehicles in North East. He added, “By collaborating we can go further and faster together, reduce costs, and ensure that no-one is left behind. We’re committed to bring United Kingdom which has to offer to this partnership: our policy best practice, our growing ZEV (Zero Emission Vehicle) supply chain and the cutting edge innovations that our companies can deliver to this region.”

Neera Daulagupu, Secretary to the Government of Assam Investment Cell, Industries & Commerce Department, sounded  hopeful of  UK-North East partnership on E- mobility. Speaking about the  challenges and  ambitions of North Eastern States and Assam to accelerate E-mobility, she said: “The State of Assam and the North Eastern States are creating a conducive environment for industry and research institutions to focus on cutting edge research in EV Technologies to make NE the preferred destination for Electric Vehicle and component manufacturing”.

UK is finding India a lucrative market for green vehicles. It looks to be an early bird in investing in India and North East in particular.

A projection made  by the consulting firm RBSA Advisors stated:

“EV sales are likely to increase exponentially in the coming days. With the only certainty over the future prices of diesel/petrol being that they are unlikely to reduce soon, more choices being made available to the consumer in terms of electric vehicles and initiatives by the Central and State Governments, the sector is expected to attract huge investments as well. Each of the last three years have seen double digit deals and we expect this trend to continue,” Rajeev R. Shah, Managing Director & CEO, RBSA Advisors.

India’s electric vehicle (EV) market  can  grow at a compounded annual growth rate (CAGR) of 90 per cent by 2030 and is expected to touch $150 billion.

Tough currently, for hardly any  ripple can be noticed  in Indian EV market. But the transformation in this new  ‘Green Revolution’ would witness a new world in mode of transportation which could happen as soon as by 2030. Barely 1.3 percent accounted for sales of EV during 2020-21 but with India’s shift to shared, electric and connected mobility, and its numbers, it could be one of E-major  markets  globally.

Battery swapping and refuelling in itself is going to become a vast field of business.

The UK’s High Commissioner to India Alex Ellis had earlier stated  that climate change action is a key component of Prime Ministers Modi and Johnson’s 2030 Roadmap of “One Sun, One World, One Grid Initiative’  will revolutionise Green Energy.