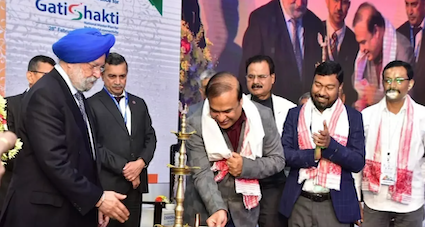 Assam Chief Minister Himanta Biswa Sarma has asked the centre to allocate some shares in Oil India Corporation (OIL) to Assam.  The CM was speaking at North East Zonal Conference for Prime Minister Gati-Shakti Master plan for multi modal connectivity. The conference was held in Guwahati in presence of Hardeep Puri, Union Minister for Petroleum and Natural gas, before he flew off to Europe in rescue operation of Indian students.

PM Gati Shakti – National Master Plan for Multi-modal Connectivity— was launched by Prime Minister Narendra Modi in October 2021. It aims to bring 16 Ministries including Railways and Roadways together for infrastructure connectivity projects.

The CM urged the Centre that to help OIL in its

smooth functioning and extending area of exploration, the Union Minister should initiate some steps for allocating some of its shares to the State government.

CM Sarma informed  that the PM assured of funds to the state for the development of capital infrastructure while declaring his government’s full commitment  and unconditional  participation in the implementation of the programme.

The state government has set up a 3-tier hierarchy viz.. Group of Secretaries,  Chief Secretary as Chairman and Secretaries of State Government Departments as Members.

To assist the above panel, a Network Planning Group would be constituted, comprising of Senior Officers and a Technical Support Unit,  with aim to develop the Master Plan, Sarma said

The Chief Minister further informed that his government would  train  the concerned professionals and officials to ensure the success of PM Gati Shakti. He looked optimistic that the North East Zonal Conference would rewrite history, at least of this area.