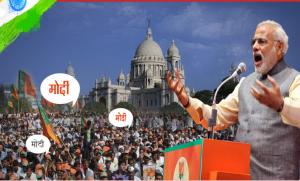 Nothing could be ruled out, least of all violence, as Mamata Banerjee’s Tranimul Congress (TMC) plans to hold its two rallies within 50km of PM’s venue the same day. One, it would scare people from turning up at PM’s rally; two it would prevent transporters from renting out vehicles for the rally.

Apart from meetings in Alipurdaur’s Falakata and Cooch Behar’s Mathabhanga Trinamul has planned sit-ins across Bengal for two days from Thursday.

Churabhandar in Maynagauri, the venue of PM’s rally, is 36km from Falakata and 53 km from Mathabhanga.

The BJP has go the wind of TMC’s real plan. “The meetings are called to create tensions and discourage many from attending the PM’s rally. Trinamul will also start hiring vehicles on the pretext of meetings to create an artificial shortage,” said Gangrapasad Sharma, the BJP chief of Alipurdaur

TMC’s brazen blockade or creating hurdles in BJP exercising its’ constitutional right in pitching for its poll prospects bear no repetition – even though much of it is blanked in English mainstream dailies. For instance Shivraj Singh Chauhan, vice-president of BJP and the chief minister of Madhya Pradesh not long ago, was denied to land his chopper for rally on Wednesday but very little or no mention has appeared in mainstream media. Consequently, his Murshidabad rally was cancelled.

Discerning readers must also keep a watch on the report which the West Bengal governor Keshari Nath Tripathi would present to the Centre following a meeting with the chief secretary and the DGP of the state. It’s also worth reminding the readers that the controversial Kolkata police commissioner, Rajeev Kumar would’ve to present himself in Shillong before this week is out where he would be grilled by the CBI for his alleged damaging role in chit fund scams.

Watch this space readers. Your newspapers won’t let you the real picture.