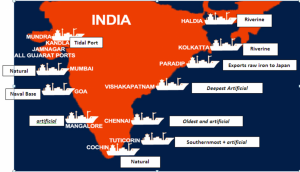 New Delhi Television (NDTV) Limited has filed a petition with the National Green Tribunal (NGT), asking for the Indian coastline to be protected and the “Sagar Mala” project be stopped on all new ports of the country till the tribunal makes a decision on the coastal environment and livelihoods of coastal communities.

Business Standard reports  “NDTV has contended that the innumerable ports being planned across the Indian shoreline could be dangerous for coasts and authorities should make a carrying-capacity assessment before going ahead.”

The Sagar Mala project is a strategic initiative of the Government of India to modernize India’s ports. On March 25, 2015 Cabinet gave approval to this project to develop 12 ports of India and also 1208 islands. The programme aims to promote port-led development in the country by harnessing India’s 7,500-km long coastline, 14,500-km of potentially navigable waterways and strategic location on key international maritime trade routes.

The overwhelming view on social media is that the NDTV move would retard the tremendous infrastructural and investment push which the Modi government is seeking for India’s growth. It is no different from various foreign-funded NGOs who don’t want any country to reach its full potential on its own merits and inititiative without meddling from international bodies such as International Monetary Fund (IMF) and World Bank (WB). NDTV often  puts itself in conflict with the present central government which may have been exacerbated by various probes by official agencies into its financial accounts.

This petition by NDTV is arguably the first instance where a media house has donned the role of an activist, famously described in a tweet as “So NDTV is now an NGO.”

NDTV has asked the tribunal that civil and criminal action be taken against authorities, governments and private companies for causing damage to the coast due to their neglect, oversight or complicity.

NDTV has made the ministry of shipping and the ministry of environment, forests and climate change respondents in the case along with the port authorities of 11 States and Union territories that have a coastline. Some of the responding authorities have now challenged NDTV’s petition on ground of merit and limitation—that the time available to file such a petition is legally over. (Readers can access the full Business-Standard report here).