Meet the Banyan tree, below which, as per legend, Krishna narrated Bhagvad Gita to Arjuna 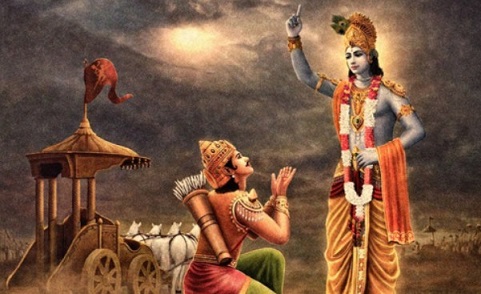 (This is second piece a long series on the epic Mahabharata, marking legends about the venue which exist to this day, timeless in glory and reverence. The first one could be read here).

Jyoti’ means light and ‘Sar’ means the core meaning. Hence the name of place is a reference to the ‘core meaning of light’ or ultimately of God. It is one of the most revered holy sites of the holy city of Kurukshetra and of Hinduism. A Vat (Banyan tree) stands on a raised plinth. Local traditions say that this tree is an offshoot of the holy Banyan tree under which Lord Krishna delivered the sermon of Bhagavad Gita, the doctrine of Karma and Dharma to his wavering friend Arjuna. It is here that He showed his Virat Rup (Vishwarup)

The legend has it that this is place where Krishna delivered the Bhagavad Gita to Arjuna to remove his confusion and dilemma and prepare him to face  his own people, stronger and greater warriors like Bhishma and Karna in the Mahabharata War. The banyan tree under which the Bhagavad Gita was delivered still stands today well maintained by the Government of Haryana.

This place is the middle point of the Krukshetra War battlefield and Sri Krishna and Arjuna on their chariot stood between the armies of the Pandavas and Kauravas. There was a gap of 2kms between the two armies. The battlefield of Kurukshetra spreads across the current towns/cities of Kurukshetra, Karnal (Where Karna was killed), Sonipat and Panipat.

Jyotisar Tirth, which is part of 48 kos parikrama of Kurukshetra, has been renovated and enhanced by the Kurukshetra Development Board. A marble chariot depicting Krishna delivering the sermon to Arjuna marks the site of the Bhagavad Gita. The Place was recovered in the Early 7th Century AD by Adi Guru Shankaracharya and hence has a temple dedicated to him as well.

A Total of 18 Akshoni Sena (Army) fought in the battle, 11 Akshoni for the Kauravas & 07 Akshoni’s for the Pandavas. One Akshoni is 2,18,700 plus the same number of sarathis (charioteers).

Below is the Break up of each Akshoni.

18 such sena died in the battle of Mahabharata,

The Battle was so fierce & bloody that it’s said 80% of India’s male population was wiped out in those era & the River Saraswati which used to flow alongside Kurukshetra, turned red for times to come. Some 4 million are said to have perished.

Even Sri Krishna’s famed Narayani Sena also perished and only one of his commanders survived Satyaki. After the battle, Sri Krishna and Yudhistir are said to have performed the Pind-Dan of those departed soul in Pheowa, which we will cover in our upcoming episodes.