Modi and calculus behind ‘no’ on Jerusalem 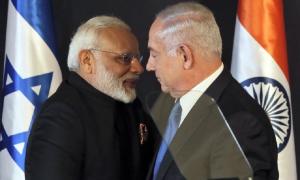 There’s been a disquiet in India’s public space over Modi government’s rejection of US President Donald Trump’s decision to recognize Jerusalem as Israel’s Capital in a United Nations General Assembly resolution recently.

This disquiet has grown to anger after Palestinian envoy in Islamabad was seen in the company of Mumbai attack mastermind and global terrorist Hafiz Saeed in Rawalpindi though a strong protest by India since then has led to envoy’s recall to home by the Palestinian Authority.

The erudite supporters of Prime Minister Narendra Modi are questioning why he would stand with the Palestinian cause and vote against US, and Israel,  having worked so hard to get both of them eating out of his hand lately.

Israel’s support in the realm of technology, agriculture, security and defense has ramped up significantly in recent times and Trump misses no opportunity to gush over India and its leader.

The rabid supporters of BJP are aghast why their government would stand by “ungrateful” Muslims while it’s erudite patrons are questioning why New Delhi didn’t abstain from voting as 35 others had done.

Adding to the chill is US ambassador to UN Nikki Haley’s crude words “…this vote will make a difference…on how we look at countries who disrespect us in the UN.” Trump threatened to cut down funds to those who opposed him and Netanyahu called the UN a “a house of lies.”

The truth is, India did everything right on all three counts which should matter for the country: beneficial, practical and moral.

About 19 per cent of India’s total world trade is accounted for in the Middle East (as compared to nearly 1 per cent with Israel) which ought to halt in track the juggernaut of criticism. Such scales of benefit could only be denied by fools, if not blind.

The practical takeaways, if anything, are bigger. US has fallen flat on its face in West Asia and its strategy to sow discord and anarchy through Iraq invasion and conduits for the growth of Islamic State (IS) has been successfully reversed by Russia, in alliance with Iran, Syria and Hezbollah. So much so that even a traditional US supporter Turkey is on the opposite side of the fence.

The vacuum of US in the Middle East would soon be filled up by Russia in alliance with China which is using its typical trade and infrastructure growth route to look for strategic stranglehold in the region. India would be foolish to be seen standing in opposition to the new Big Boys in the region. India can’t overlook the China Pakistan Economic Corridor (CPEC) too which would encircle it in an iron clasp more so since China is parking itself on ports of Sri Lanka. Letting go of West Asia at this stage would be a suicide, no less.

By rejecting the Trump’s move on Jerusalem, India is also letting the world know of its independence lest it be seen as a US lackey. It would earn India respect and a sense among its friends that it’s a principled ally. Further, India can’t allow itself to be bound by Trump’s often hasty and boorish decisions.

Absentation would’ve been a paper umbrella—only giving the notion of protection against a downpour. It would still have earned a scorn from the free world, without quite endearing it to US or Israel. Worse, it could’ve emboldened them to see if they could kick around India in future.

India’s decision to stand on its moral compass would draw a host of lesser nations in its orbit. Forget criticism, Modi government’s move deserves a standing ovation.

To brush up history for the uninitiated, Israel has been controlling the eastern Jerusalem since the 1967 six-day war. It’s being sought by the Palestinians as the capital for its future state.