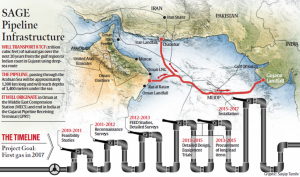 Everyone expected Indian prime minister Narendra Modi to lay out a concrete roadmap for TAPI, that is Turkmenistan-Afghanistan-Pakistan-India gas pipeline on his visit to Ashgabat this week.  Instead, he chose to talk up the Iran-Oman-India undersea pipeline.

Sure, the Iran-Oman-India pipeline has been heard of in the last two years. Indeed, Oman invested $90 million on it over a decade ago.  But India had visions of Iran-Pakistan-India pipeline till it withdrew under US pressure in 2009 which wanted its pound of flesh for the civil nuclear deal concluded a year earlier. Besides, India has long been frustrated by its lack of land access to Central Asia and Middle East due to being hemmed in by Pakistan and China. TAPI suffers from a similar impediment.

India, it must be said, is buoyant on the recent Iran nuke deal. It has invested heavily in Chabahar port in Iran which is just 940km from Mundra port in Gujarat. Iran being its second largest oil exporter, India has sought an easier marine transportation access. Not just oil, Chabahar port offers a range of imports through the sea route.  It can be a pivotal port for India’s trade with Afghanistan and Central Asian republics which includes metals and minerals.  India energy dependence is immense–imports 75 per cent of its crude oil.

Chabahar is critical from another aspect. India is part of International North-South Transport Corridor (INSTC), the ship, rail and road route planned for moving freight between India, Iran, Azerbaijan and Russia. Chabahar would facilitate it. Indeed, Chabahar could be India’s Golden Gate.

Still, the link to Chabahar is about marine transport. The vision of an undersea multipurpose pipeline which Oman has sought to develop, and Modi has shown interest, is something else.

Oman is India’s main gas exporter. Last February, India’s then foreign minister Salman Khurshid visited the gulf country and supported the project. The major turnaround has been the technological advances of recent years.  Now pipelines are being built under the Mediterranean Sea from Algeria to Italy; and under the Black Sea from Russia to Germany. The undersea, or offshore pipelines, could also be further linked to Qatar and Iran. It would then be easy to connect with Central Asian republics, and onwards to Turkey and Europe for all you know.  Logistics is a bigger issue in transportation of gas than in oil.

The Iran-Oman-India pipeline could flush gas from Iran’s South Pars oil and gas field. The pipeline could run around 1400 kilometres. The project could cost upwards of $ 5 billion.

India also just can’t afford to be left too far behind China. It’s just not economics but also geopolitics. Under the $46 billion China-Pakistan Economic Corridor (CPEC) project, China has brought the Gwadar port in Pakistan almost to fruition. It wants to connect Indian Ocean with Kashgar in Xinjiang, China’s westernmost city. The Iran-Pakistan pipeline could be operational soon. Iran has already constructed its section of pipeline. Pakistan needs to construct just 80km of pipeline from Gwadar to the Iranian border. China has promised to do it on their behalf. It should be operational in next two years. So the Oman project could be a serious counterpoint from India given the volume of not just gas and oil, but also water, it could manage.

The New Delhi-based South Asia Gas Enterprise (SAGE) has already done a feasibility study on bringing Iranian gas via Oman to India’s west coast. It reckons the pipeline could bring about a volume of 31 million cubic meters of gas. It could transport up to 8 trillion cubic meters over a 20-year period, according to an estimate by Fox Petroleum.  It is also claimed the India’s gas imports would be far, far cheaper than its current LNG imports costs.  Modi told Turkmenistan in the recent visit that the latter could also export its gas to India across Iran and via the subsea pipeline.

A bit of critical facts on the pipelines, both onshore and offshore. It’s 40 times safer than rail tanks and 100 times safer than road tanks.  The spillage ratio is also fairly less—it is less than one teaspoon of oil spilled per thousand barrel-miles. Its usage will only grow bigger.  The global oil demand, from 75 millions of barrels of oil per day (mb/d) in 2000 is likely to be 120 mb/d in 2030. Fossil fuels will remain the primary source of energy, meeting more than 90 per cent of the increase in future demands. Gas consumption in particular is likely to double by 2030.

Internationally, 32,000km of new pipelines are constructed each year. Around 8,000km of offshore pipelines are being built per year, with 60 percent in NorthWest Europe, Asia Pacific and the Gulf of Mexico.

This is despite the problems of laying offshore pipelines. Route-selection is critical given the geohazards, offshore ecology and physical factors—sea-depths can run many a kilometres deep under.  Pipelines need to be laid on the seabed or below it inside a trench. Construction and maintenance is a major challenge due to wave and current dynamics.

One must not also forget that pipeline industry is “risk averse.” It will not take high risks for low rewards as the costs of mistakes—safety, environmental and fiscal—are immense. So the future of basic engineering is likely to be predictable and conservative.  Still, 6,000 kilometres of pipeline were laid at the bottom of the North Sea some 40 years ago!