Modi calls out Indian Communists and here’s why 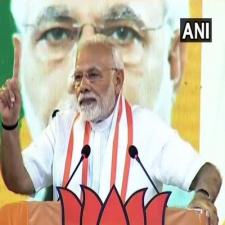 Prime Minister Narendra Modi has said that “Indian Communists do not respect India’s history, culture or spirituality,” while condemning the “most shameful” behavior of Pinaryi Vijayan’s Communist LDF government on the Sabrimala Temple issue.

Predictably, the CPI (M) has gone ballistic against the comment on its twitter handle but I ask what’s there to argue about really?

Let’s take India’s pre-independence history. Didn’t communists in Bengal assembly support The Partition? (It’s an irony though that communists, like Leftist Amartya Sen had to flee East Pakistan to India whose unity they had betrayed). Wasn’t CPI (Communist Party of India) officially against the Quit India movement?

Or the annals of India after Independence. Didn’t the CPI chief B.T. Randive termed India’s freedom as fake (“yeh azadi jhooti hai”) and called for an armed revolution in 1948? Who do you think a section of Communists supported in the 1962 Indo-China War? (E.M.S. Namboodiripad among others argued in favour of China and dubbed India as the aggressor). Isn’t the pro-Chinese faction of those days is the Communist Party of India (Marxist) today? Didn’t the CPI (M) parrot the line of its masters in China in opposing the historic Indo-US nuclear deal in 2007?

And what to say of the “Eminent Historians” from the stable of Communism who have butchered the Indian history in India’s text books and academia. For instance, are you told the story of Battle of Talikota of 1565 when Vijaynagar Empire which had two Muslims as its main generals who, at the last minute, betrayed the legendary Hindu kingdom and went to the other side? (It practically ended the golden era of Hindu renaissance).

And how do you think the story of destruction of Hindu temples by invading Muslims is told to you? Famous Indologist Dr. Koenraad Elst points out the instance that invading Muslims are blamed only for destroying 80 temples in India. Though one of these 80 entries read: Qutubuddin Aibak, the military general of Muhammad Ghouri, destroyed 1000 temples in Varanasi!!!

And how do you think dreaded Mughal Emperor Aurangzeb’s destruction of all the temples in Varanasi is explained away? That it was due to a Brahmiin conspiracy as one of Muslim princes had been abducted and hidden away in a temple? Any historical proof? My foot.

Can Indian communists deny that one of the main planks of their ideology is atheism? Isn’t it a fact that one of their leaders, Brinda Karat once led a savage attack against Baba Ramdev? What’s been their stance when the Kanchi Shankaracharya was sent to jail? Or on Sri Sri Ravi Shankar who gets targeted often? If these men don’t matter to you then isn’t Modi justified in claiming that Indian Communists do not respect India’s history, culture or spirituality?

Would these communists ever confess that Stalin killed more people than Hitler did before or during the Second World War? Would they acknowledge the genocides of a Mao Zedong or a Pol Pot? Or is that genocide of millions don’t matter in this case while a stray lynching sees them paint the town in red? What was their stance when Salman Rushdie’s book “Satanic Verses” was banned in India?

So thorough is Communists hold on our textbooks and academics that anyone who holds a contrary opinion is never allowed to rise up the academic ladder. But all those who fall in line are conferred with position and prestige.

There is a lot more which could be said about Communists and Naxalites, including the Urban Naxals, but this must wait—some other day, some other time.