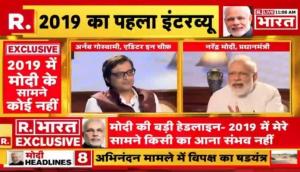 While everyone will have their own take on Prime Minister Narendra Modi’s no-holds-barred interview with Arnab Goswami in Republic Bharat on Friday, my two-penny on the subject is that never before an Indian Prime Minister has shamed the Media in the manner the “chowkidar” has done.

Take the trouble of listening to the entire Modi interview (link). If I am an active media person, I would be drenched into sweat. It’s a damning indictment of Media as the Prime Minister repeatedly brought forth how they provided the shield to forces who could say or do anything and get away with impunity.

It’s now clear that there is a lobby in India, both political and academic, which stands up for Pakistan and misses no opportunity to portray Imran Khan as “statesman-like” while reserving scorn and derision for everything which Modi utters or does. Taking a veiled hit at media, Modi said: “Kuch log hain jo inki suraksha kavach ban ke bethe hain, isse inn logon ko kuch bhi bolne ki choot mil gayi hai (There are some who are providing an armoured shield to these forces and which in turn has encouraged them to say and do whatever they want with impunity).”

Modi was greatly pained to see Media quietly letting go the disturbing incident in West Bengal in February when chief minister Mamata Banerjee descended on the residence of Kolkata commissioner Rajeev Kumar and allowed the sorry spectacle of investigating CBI officers being detained in police station. Their families and residence quarters were also put under siege. It was a truly low moment for India’s democracy. Modi, the pain visible in his voice, said: “The way media has surrendered on West Bengal is very disturbing development in democracy.”

During the course of his interview, Modi turned his attention to the fake promises which Congress makes before elections and the way media doesn’t expose it to the readers. “In 2004, they announced the Direct Benefit Transfer (DBT) to farmers. The same was done in 2009. It was we (BJP/NDA) which made it a reality. Before the (recent) states elections, they promised cash payments to youth. It’s not started even in one state,” thundered Modi “Why you(media) don’t question their track record…Did you question?”

Lutyens Media is quick to seek a reaction from the Opposition whenever a charge of perpetuating dynasty is made against the Congress and their reply invariably is that BJP has its own dynasts. Modi was scathing on Media to let this pass without any introspection. “There is a difference. One (Congress) is controlling a party; others are winning or losing elections on the perception of voters. In essence, one is deciding on its own family who should head a party (generation after generation); while in other cases, the decision is in the hands of the voters. “Controlling a political party (in this manner) is not good for democracy,” Modi reasoned.

Citing an example, Modi said if the prices of tomato go up, these (media persons) go to a housewife and ask her how’s she feeling the pinch. When the prices go down, Media train their mikes at farmers and ask about their pain on reduced tomato prices. “What do you really want,” Modi asked in his own logical manner.

In his typically humourous way, Modi urged media to ask questions to such forces without fear. “Don’t be afraid and ask boldly,” for these forces are not going to win the 2019 Election and come back to power.