Munger tragedy could be a classic political plot: We need to pay attention 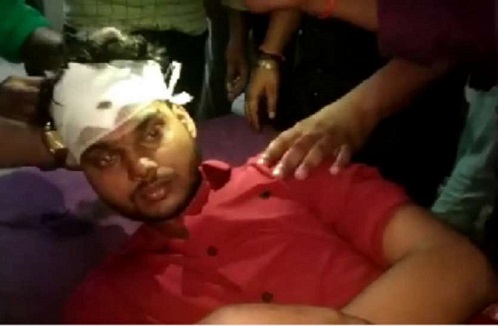 We all need to know more on Munger. A teenager has lost life. Around three dozen are injured. Victims are calling it brutality of the police. The other side claims the police never fired. Whodunnit?

All this happened on Monday-Tuesday night. The annual Durga Visarjan (immersion) procession was on. Usually, it’s immersed after three days of Vijayadashmi (Dusshera). This time the district administration wanted it to be over within one day because of the Bihar assembly elections which has begun today. The devotees were in the process of doing as was required when the incident happened. Serious political fallout could happen—if a tragic death alone doesn’t get our attention.

There are couple of videos in public domain. One shows the devotees sitting still in front of the Durga idol, ostensibly to protect it, even as the police is raining blows. The crowd is straight from Mahatma Gandhi’s copybook. The police, like colonialists, appear revolting. Watch the video below

This is from Munger in Bihar. A most brutal attack on Durga Puja devotees by police and security personnel. Pictures of a youth killed in this attack are horrific and deeply disturbing. pic.twitter.com/Bpqptzb3e1

There is another video in public domain. It’s “eyewitnesses” narrating on camera what happened. One of them claims that the teenager was shot right in front of him. “His head was blown to pieces,” the interviewee narrates.

Let’s not immediately vouch for the two videos. Though the video of devotees being thrashed is heart-rending, there must have been something which provoked the police. Afterall 20 policemen have been injured. The attackers must have been bigger in number.

The second video shows crowd saying in chorus that the policemen received instruction to open firing at the behest of Munger Superintendent of Police, Ms Lipi Singh. They base their claim on policemen uttering “Madam, Madam” on the phone. We don’t know if it is real or staged. Neither possibility could be denied.

Now Lipi Singh says the fire was opened by unruly elements. The unfortunate death wasn’t caused by police, she claims. It’s borne by the “weapons and bullets” which since have allegedly been recovered. She says the attempt was to create anarchy and chaos…(on the eve of elections). District magistrate Rajesh Meena too has also claimed that an attempt was made to create a law and order situation in the city.

Opposition—read Congress, CPI, RJD—have naturally gone to town. Tejaswi Yadav has drawn parallel of Lipi Singh with General Dyer. Randeep Surjewala has called out “Nirmam Modi.” And so on. The thrust is that Lipi is the daughter of senior leader of ruling JD(U). Her father RCP Singh was an IAS officer to begin with before he joined JD(U) and is now a Rajya Sabha MP. Lipi’s husband Suharsh Bhagat too is an IAS officer, looking after Banka, another district of Bihar. All this is gift in the mouth for Opposition.

Lipi, let it be said, has been a meritorious police officer. She had daringly arrested Mukama’s “BahuBali” Anant Singh last year and found an AK-47 in latter’s residence. She is called Singham after a popular cop-character. It could well be that her claims are true. For normally police opens fire only after warning and teargas have failed to rein in an unruly mob. I couldn’t find if tear gas was used. And if true, it must lead to wariness if police indeed resorted to firing.

The timing of the incident surely has a political underpinning. The fact that Lipi could lead straight to JD(U) doors and hurt the latter’s prospects is a logically corollary. Who benefits from it doesn’t need an explanation. Provoke policemen, drive them wild, and could somebody then shoot the video please?

I suspect the Bihar administration would move quickly on the matter. And they should—for if it’s a political conspiracy, the goons must pay price even if they are in politicians’ garb.