Neo Nazis who Putin keeps pointing: and West keeps pushing under the table 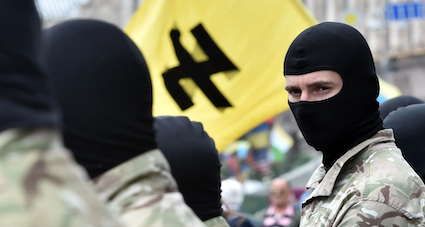 Two questions should concern us for which we get no answer from the mainstream media.

One, when is the war ending and how.

Two, if snuffing out Neo Nazis is Putin’s aim, where are they hiding?

It should be clear that both issues are linked: Russia gets out of Ukraine when Neo Nazis are smoked out.

There is a method in how Putin is going about it: and the map below should make obvious his plans even as West and its stenographers we call media keep gloating on Ukraine’s heroism and punishing sanctions.

As the map above shows, Russia is carrying out operations on three sides of Ukraine: (a) From the South, one is headed from Crimea and is smelling Kiev—and there is another branching out towards Mariupol which is the “gate” for Donbass and Luhansk, the two regions Russia has recently declared independent; (b) Then there is one plunging down from the north, through Belarus, towards Kyiv; (c) And there is another which is routing through Sumy city, again in the northeast towards Kiev.

Russia aims to cut off supply from Kiev to flush out “Neo Nazis” from key regions, such as Mariupol; allow Ukrainian soldiers a passage to leave if they desire so; and hugely mindful  all this while that they don’t bomb residential buildings and civilian centres lest another Raqqa is created in the heart of Europe.

No proof is needed that much of Ukraine’s arms depots, air and naval assets have been neutralized: Or else the 40-km long convoy which has been splashed all over would’ve been taken out by the Ukrainians from the sky.

For the moment, Ukraine’s game is to keep Russia marooned on its land as long as it could; keep getting arms supply and financial aid from West; let sanctions on Russia keep rolling, its “barbarity” demonised for future generations.

The Neo Nazis Putin keeps referring to, the ultra-right nationalists, amongst whom Azov Battalion is the hood of the serpent, is no figment of imagination. It’s a mother-hive for those of their ilk  with recruits coming from all over the world—UK, US, Sweden, Brazil etc.  In 2018, four white supremacists trained by the Azov Battalion were arrested in California.

These ultra-fascists by their own admission have nearly 20% of their cadre as Neo-Nazis for whom Hitler is a hero and Holocaust never happened; their logo features Wolfsangel (see below), one of the original symbols used by the 2nd SS Panzer division Das Reich.

Azov Battalion initially faced music from the US between 2014-2017; in 2018 the US House of Representatives had passed a provision blocking any training of Azov members by American forces, citing its Neo Nazis association; yet magically the restrictions were removed and aids kept pouring.

Ukraine, on its part, mainstreamed them. The Azov Battalion was formally incorporated into the Ukrainian military in 2014; it’s a  Neo Nazi unit of the National Guard. Known as the National Corps, it was deployed all across the country alongside the national police. In November last year, one of its most prominent militiamen, Dymytro Yarosh, was appointed as advisor to the Commander-in-Chief of the Armed Forces of Ukraine.

Yarosh is a disciple of Stepan Bandera, the collaborator of Hitler in World War 2, and who is being lionized in present-day Ukraine. In 2018, one of its city Lviv declared that 2019 would be the Year of Stepan Bandera, igniting protests from Israeli and the Polish government. There are several monuments in honour of Bandera throughout western Ukraine.

It is these Neo Nazis who Putin wants to flush out. Azov Battalion is based out of the strategic port city of Mariupol. There are confirmed reports that it’s keeping the residents of Mariupol as hostages. Those who try to leave are being killed. The Guardian found many on its rolls to have “disturbing” political views.

In December 2021, Ukrainian president Volodymyr Zelenskyy delivered a “Hero of Ukraine” award to a leader of the fascist right wing group in the parliament. A few months earlier he had announced Ukraine would retake Crimea by force. In November 2021, Ukraine said it would retake Donbas by force. Zelenskyy them announced in Munich that it would acquire nuclear weapons, that it already has materials and expertise for it.

Is it any wonder that Putin has acted the way he has. His operations in Ukraine clearly show a strategist who had been planning his own moves all along. Such an operation as underway now takes months of planning. Our New York Times and Washington Post may never let out the misery Azov Battalion brings to Mariupol; the mercenaries and terrorists being planted in the heart of Europe—a la Al Qaeda and ISIS; the rise of far-right elements on the Continent which would tear asunder the Europe we know: the divide and rule deepened between West and Russia in Europe which is the lifeline for Washington.

It’s a pivotal moment in world history. Either the story of last 500 years would have its’ extension; or a New World Order would take shape. Both of them would come at a cost.