New ministers you won’t hear about again: For Modi, silence is golden 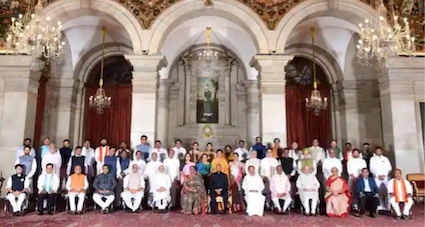 How important it is for rulers to speak to its subjects? And on what issues? Or whether it’s advisable that they let their work do the talking?

I raise this issue as I cast my eyes on the list of existing and new ministers. I am sure when the need arises, many a ministers competently address the issues on their tables. Men like Piyush Goyal or a Nitin Gadkari or a Hardeep Singh Puri could also mount an attack on Opposition, as does Nirmala Sitharaman and Smriti Irani at times. A few who were similarly ambidextrous with words—Ravi Shankar Prasad, Prakash Javadekar and Dr Harsh Vardhan—found themselves cast in a heap. Is their ouster a message that they spoke too much while doing too little?

Let’s agree on a few premises. One, under the Modi era, speaking without a nod from above isn’t an endearing quality. Two, the more faceless you are, the more numbers you add in your evaluation. Three, honesty is a prerequisite. Fourth, a logical deduction from the above three is the core philosophy of Modi era: Why do a minister needs to speak anyway?

I raise this issue because Smriti Irani of her early days in cabinet, used to speak like a fire. Her retorts were sharp and uplifted the countless supporters of BJP. She resonated with the unheard of anger of faceless BJP supporters who acquired a conviction from such an echo of their views from a high chair. It built and shaped their moral fibre to party’s benefit. I saw it as an awakening of national consciousness.

Then Irani fell silent. Around the same time when Sadhvi Pragya had to pull in her vocal horses. A pattern gradually emerged: Don’t waste your time in taking on the Opposition. As Modi himself said: “Janta Janardan khud inse nipat legi (The masses would fix them anyway).”

Such an approach is prudent if one is in Modi’s shoes. Controversial remarks only fuel the fire, the twigs of which are arranged from a domestic-foreign nexus. Their surround sound would drown yours anyway. If we won’t be heard, why bother engaging them in their own game?

That’s why you never heard a powerful defence of a legitimate cause of CAA when the toxic drain of Opposition overflowed with the garbage of media. That’s why you saw the indulgence towards protesting farmers, lest it tears apart Sikh from Hindus which was the original design of ISI-Break-India forces anyway. That’s why the nation’s anger on horrific post-poll violence in Bengal hasn’t found a vindication from Modi or his men. Modi would rather have investigating agencies put a boot on their throat than engage in a public spat.

It’s all fine if Modi feels it’s important he carries on with his vision for India than be dragged into a matrix of his rivals. Modi is prepared to disregard the anger among ordinary Indians on anarchy, unleashed by anti-CAA, protesting farmers and post-poll violence in Bengal while his audience view it as a sign of a cowardly government. The same philosophy I guess is amply understood by his ministers: The Boss wants us to Walk the Walk and not Walk the Talk.

Where does it leave tens of millions who feel helpless in their leaders’ visible inaction? They are disenchanted but perhaps Modi feels, say a course correction in Bengal just before assembly elections in Uttar Pradesh, would win them back. If hundreds of lives are lost or uprooted in Bengal, it’s only collateral damage. I know it’s harsh but when a war is to be won, a few battles lost could be strategic. If Modi was scared, he would’ve toned down the farm bills and retraced on J and K and CAA. Or wouldn’t have greeted Dalai Lama, in a daring taunt to China.

So these new ministers have made news today but perhaps would never be heard hereafter. A twitter here, a vaccination there would elicit a response but nothing major. Even Bhupinder Yadav, now that he is a minister, won’t be seen penning an OpEd in Indian Express often. A Venkaiah Naidu is a rare sighting these days anyway. Modi banking on “Janta-Janardan” in a dichotomy since the latter is looking at the prime minister and his men to tend the cause.

I personally would like some fiery retorts that we see from a Yogi Adityanath and a Himanta Biswa Sarma at times. They are too important to be asked to shut up. I don’t think it hurts BJP’s cause, irrespective of the fangs that domestic and foreign dogs bare in response. It affirms our faith in this government, if nothing else. To think we are not important enough, being from a minor English-speaking and a low-priority middle class to boot, would be a very, very narrow view. Every soldier must matter in what is going to be a battle for generations. To treat us as dispensable in immediate future is a slight we don’t deserve. And it certainly doesn’t help our common view on India’s future.