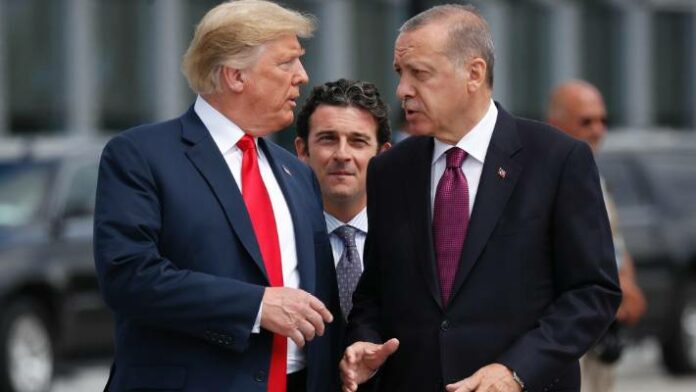 Two Mikes from the United States, Mike Pence (vice-president) and Mike Pompeo (secretary of state), would be in Ankara on Thursday which is the latest farce on Turkey’s invasion on Kurds in Syria, now in its 10th day.

Pence and Pompeo have been ridiculed by Turkish president Recep Tayyip Erdogan even before they have set foot on Turkish soil but that’s a badge of honour for the two who would defend president Donald Trump till the end of the world even if it tars a fresh coat on their reputation-for-ridicule as the most repulsive figure and worst secretary of state in the history of United States.

Both are on mission of “Saving Kurds” from Turkey which was facilitated in the first place by their boss himself who since then have swung from one extreme to other that would put a spider monkey and its prehensile tail to shame. Trump first questioned Kurds’ loyalty; then vowed to destroy Turkey’s economy and has now indicted latter’s state-owned Halkbank even though the real “sanction” is an eternity away.

This farce outrage for public consumption has been echoed across the Atlantic by the traditional European allies of the United States. European Union and NATO have bristled with fury, a whole lot of European nations, be it heavyweights Britain, France, Germany or lesser lights like Spain, Italy and Netherlands have put embargo on arms export but none of them have ventured to slap debilitating sanctions on Turkey. After all, who would risk millions of refugees dumped on their doorstep, and further beef-up the right-wingers in their own backyard?

Closer home, Erdogan chortled in glee when Israel’s Prime Minister Benjamin Netanyahu took days to condemn his incursion into Syrian territory even though it multiplied manifold the existential threat of the Jewish nation. Saudi Arabia took the potshot against Turkey behind the veil of Arab League, another sound of fury signifying nothing. Israel and Saudi Arabia can neither count on any tangible action from their “big brother” United States in their backyard—after all, what did US do on Aramco attack?—nor have the requisite muscle of their own now that Iran-Syria-Lebanon seem set to write new rules in the “great game” of the Middle East.

Syria has predictably moved forces in its troubled northeastern part but don’t be fooled it’s an operation against Turkey. Both are sidestepping each other’s toes in perfect harmony while a nervous world is being drummed the beats of World War III in their ears by the corrupt Western media. Nothing could be farther from truth.  Both would circle each other in ring but won’t throw a punch in anger: after all its’ referee Vladimir Putin who has every twitch of their muscles on his strings.

Did I miss United Nations? Or Australia? Or Egypt? Nor should you. The cheerleaders and their pom-pom in the piece so far is an essential guide. None of them give a damn to the fate of Kurds who not very long ago were being hailed as the saviours against the Islamic State (IS).

Meanwhile swoon on Erdogan at his bombastic best. He terms US “ugly”; warns Europeans to brace for refugees and tells everyone within his earshot that he stands “tall.” This is worth an Oscar for his domestic audience; a fillip to his loss in local elections in Istanbul in June; which came close on the heels of his drubbing in Ankara and other important cities like Adana, Antalya and Mersin in the March elections. The split in his own AKP (Justice and Development Party) is imminent. The less said about the economy the better: last summer’s balance of payments crisis hasn’t gone away; his son-in-law and finance minister Berat Albayrak is already an unmitigated disaster.

But Erdogan is safe till 2023 elections: his emergency rules allow him to use all the gross revenues. It allows him to talk of Operation Peace Spring against the Kurds; talk of war against terrorism even as he pummels and opens 78 investigations against those who dare to defy him on his move. Such is the farce which is inflicted on you and me; general citizens of the world. The duplicity of the West could shame the shameless but the naked Emperor. Meanwhile, rejoice at Russia which has allowed Syria and Iran to punch farther than their reach. It’s a seminal moment in Putin’s Russia: And it is not a farce.