Not just Pakistan, there is another country which makes India lose its cool 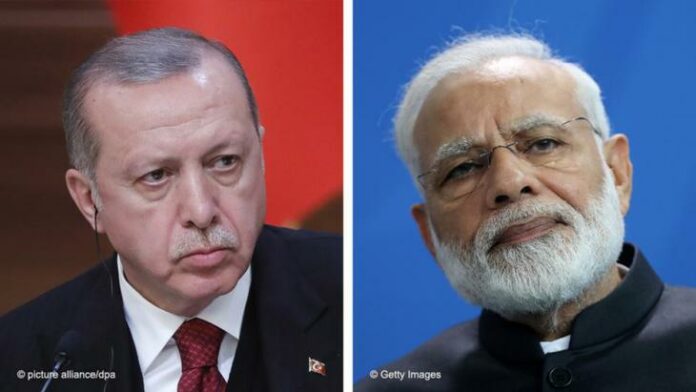 If there is one country besides Pakistan which draws hiss and roar from India, it is Turkey and a series of unprecedented measures by New Delhi in recent times lends credence to such a startling impression.

Not only India has put off a scheduled visit of its prime minister Narendra Modi, it has also shelved a mouth-watering Indian navy contract with a Turkish company. It has issued an advisory to Indian tourists to exercise “utmost caution” while touring Turkey and it mouthed fire when Istanbul put boots in northern Syria last month.

What’s wrong between the two countries which historically stood by each other in the past? It was Turkey which gave refuge to Indian clerics when colonialists Britain cracked down on India’s war of independence in 1857. A half century on, Mahatma Gandhi took up the Khilafat movement on behalf of the Ottoman Empire as it was being cut to pieces by the British in 1919. Turkey was one of the first nations to recognize India on its independence in 1947. Indeed, there are over 9,000 words which are common in the language of the two countries.

Fast forward to present times: Turkey was one of those rare nations who used the United Nations platform to internationalize the Kashmir issue this year. India hit back by snuggling up to leaders of Armenia, Cyprus and Greece which have long-standing border disputes with Turkey. The bilateral trade, which grew by one-third between 2016-2018, is reeling as the two bare teeth at each other. The chill befuddles the innocent for Turkey is a geographical marvel, straddling East and West and India is an economic candy which has the world lining up on its door. Both have ample reasons to find each other attractive.

The timeline of discord

The timeline of discord would show that it all began at the beginning of the Cold War when Turkey and Pakistan joined the Baghdad Pact, or CENTO (Central Treaty Organization), initiated by the United States and India assumed the leadership of newly-freed Colonial outposts, the Non-Aligned group, under the benign protection of Soviet Union. The wheels came off in due course with Turkey standing firmly behind Pakistan on the issue of Kashmir and thwarting India’s bid for membership in the Nuclear Suppliers Group (NSG) for a long time.

It would appear Turkey has given India a clutch of reasons to worry about, as a wounded deer would about encircling wolves. It all stems from president Recep Tayyip Erdogan endlessly gazing in the mirror and watching the heir of Ottomon Empire, the saviour of Muslim civilization, peer back at him. It makes him take up the causes from Palestine to Kashmir to Xinjiang, build mosques from Asia to Africa to Latin America and spend a fortune in restoring Ottoman heritage around the world.

India, hosting 200 million Muslims in its bosom – the third largest such concentration in the world after Indonesia and Pakistan – and is a natural target. Turkey thus takes up the Kashmir cause with gusto, openly siding with Jamaat-e-Islami, a Pakistan-based Islamic fundamentalist party, which has notorious Hizbul Mujahideen as its militant wing that causes unending cycle of violence and terror in Kashmir Valley.  No wonder Turkey is a cause célèbre among Kashmiri separatists such as Hurriyat and Erdogan’s victory in presidential elections last year led to huge celebrations in Kashmir.

Turkey plays host to extremist Indian Muslim preachers such as Zakir Naik who delivered a speech to an Islamist group, run by Erdogan’s son Bilal, in 2017. Naik had fled to Malaysia after his name cropped up after a ghastly terrorist attack in a Dhaka cafe in 2016 which left 29 dead. Modi has made a personal request to Malaysia for Naik’s extradition to India.

Turkey further runs the South Asia Strategic Research Centre (GASAM) with an aim to export Erdogan’s Islamist ideology to his audience of millions of Muslims in Pakistan and India. Erdogan thinks he has a headstart over arch-enemy Saudi Arabia on Indian Muslims: One, both Indian and Turkish Muslims are not Arabs; Two, both follow the Hanafi school of Sunni Islam which is different from Wahhabism, the forte of Saudi Arabia.

Turkey doesn’t need much to woo Pakistan. It already has Pakistan eating out of its hand as it saves the latter from international sanctions such as FATF (Financial Action Task Force), gives a global platform for its Kashmir pitch and firms up its economy. That Pakistan is also the only Islamist country which is a nuclear power helps. Pakistan further pays its dues by siding with Turkey as the latter looks to take over leadership mantle from Saudi Arabia in the Organization of Islamic Cooperation (OIC).

Turkey and Saudi Arabia of course are sworn rivals. It’s a rivalry steeped in history. It were the Ottoman Turks who engineered the fall of first Wahhabi empire in the 19th century. Ottomon Empire itself was dismantled, 100 years later. The Saudi crown prince Mohammad bin Salman, on his part, referred to Turkey as a triangle of evil, along with Iran and Islamic extremists. That Saudi Arabia is now a trusted and productive ally of India hasn’t served to dilute Turkey’s antagonism.

Thus India and Turkey have a long bridge to mend but both are kept apart by the rapids of toxicity which runs between them. Both have reasons to erect fences but not one motive to share the couch over a hot cup of coffee.