Oath-ceremony: It seems Modi’s NARA has fallen on deaf ears 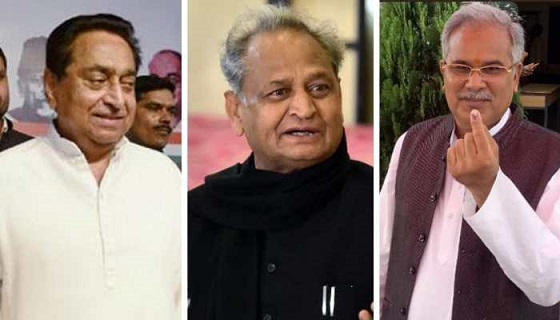 It’s very disturbing that a number of chief ministers are skipping the oath-taking ceremony of Narendra Modi’s second tenure at Rashtrapati Bhavan this evening (May 30, 2019).

Out of 29 states in the Indian Union, the chief ministers of West Bengal, Punjab, Madhya Pradesh, Rajasthan, Chattisgarh and Odisha have decided to skip the events. That’s combined representatives of 32 crores in India’s total population of 1.3 billion people, or quarter of Indian citizens.

Some have cited prior engagements (Kamal Nath, Bhupesh Baghel), some have forwarded no reason (Ashok Gehlot, Capt. Amrinder Singh) while one, Mamata Banerjee, typically is her churlish self. (Pinaryi Vijayan of Kerala is no longer CM of Kerala but he too is abstaining).

Mamata first agreed and then declined at the last minute to be in the ceremony in protest to the invitations being sent to kin of 54 murdered BJP workers in her state. That’s how her reasoning went in a tweet:

“I am seeing media reports that BJP are claiming 54 people have been murdered in political violence in Bengal. This is completely untrue…an opportunity (for BJP) to settle political scores. Please excuse me.”

Let’s first get this out of the way before we ponder the larger issue involved in opposition leaders boycotting the oath ceremony. Short that her memory is, Mamata Banerjee doesn’t remember May 20, 2011 when she first took the oath as chief minister of Bengal with the families of Nandigram and Singur victims in tow in Kolkata. She had then accused the outgoing Left Front of letting loose a reign of terror. It’s also worth reminding her—all liars deserve be shown the mirror—that outgoing chief minister Buddhadeb Bhattacharjee, who she had accused of ordering the killings, attended Banerjee’s oath-taking ceremony along with Left Front’s chairman, Biman Bose.

India’s Constitution has laid out a federal structure for the Indian government. It’s a “Union of States.” Part XI of the Indian Constitution defines the distribution of legislative, administrative and executive powers between the Union/Federal/Central governments and the states of India. The legislative powers come under a Union List, a State List and a Concurrent list.

Scan the list of powers distributed between the Union an States and you would’ve an idea of the powers—and responsibility–that Constitution bestows on Indian states. From law and order, police force, healthcare, land policy, electricity, transport, village administration etc, the States are powerful to the extent that they could be only over-ruled by two-third majority vote in Rajya Sabha. But for issues of national importance, of the integrity and unity of India—defence, foreign affairs, railways and communication etc—states are almost autonomous.

There is no prize for second-guessing why the reigning/outgoing chief ministers are boycotting the oath-taking ceremony.  Mamata is wobbling (23 in 42 Bengal);  Kamal Nath (1  in 29 in Madhya Pradesh), Ashok Gehlot (0 in 25 of Rajasthan), Baghel (3 in 11 in Chattisgarh) lay mangled as is Pinaryi Vijayan of CPIM (1 out of 19 in Kerala). Capt. Amrinder Singh couldn’t have fallen out of his party Congress’ line. Naveen Patnaik (BJD) in Odisha has just reaped the rewards of staying aloof and becoming the chief minister for the fifth time.

While Modi could rise about the ephemeral matter of electoral politics and give a call for national unity, where different states of different caste and colour; majority and minority; rub shoulders together and look at the larger goal of India’s growth, the actions of recalcitrant opposition speaks of the personal nature of their politics, self-serving where their state and the nation is never a priority.  This after the country has moved in the new direction of Goods and Services Tax (GST).

The fractious nature of India’s opposition isn’t good for its people. We all know how schemes such as Swachh Bharat, Ayushman Bharat, Ujjwala Yojana, Awas Yojana etc were impeded by these state satraps. It didn’t help the last man in the queue of poor. The masses, in turn, exacted their revenge in the 2019 General Elections. But then these anti-people chief ministers clearly are beyond repairs. It’s not good for the people, state or the nation.

(P.S: We are glad that Sonia Gandhi and Rahul Gandhi are attending the oath-ceremony. So is Arvind Kejriwal. I am curious on the likes of Akhilesh Yadav, Mayawati, Asaduddin Owaisi or Chandrababu Naidu. Have then been invited? Perhaps no for they don’t have the locus standi to appear in the august gathering).