Operation Kashmir: Modi wins the world in UN; what next? 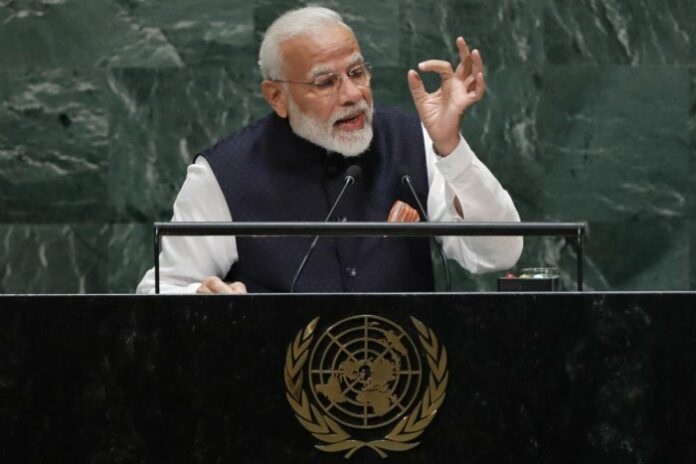 Prime Minister Narendra Modi is back from the United States. During his sojourn, he had the President of the United States in attendance and in audience in the Houston event; won the “Goalkeepers Global Goals Award” from the Bill and Melinda Gates Foundation (BMGF); and above all had the world eating out of his palms on Kashmir. No Indian, arguably since Swami Vivekananda, ever set foot on United States and returned home with such global acclaim. (Never mind if our own Shashi Tharoor is working overtime to argue that Modi’s is not unprecedented, even if he has to resort to fake news on Pt. Jawaharlal Nehru).

If Houston was imagery, the concurrence of world on Kashmir in the United Nations was real substance. Pakistan’s Prime Minister Imran Khan looked no better than a gangster, smoking gun from a nuclear upholstery, faking the championing of his country on behalf of Kashmiri Muslims, never mind he didn’t even whimper on one million fellow Muslims being kept in concentration camps in Xinjiang by China or that his country was responsible for over a million killings of fellow Muslims in once East Pakistan. Pakistan is today seen as what it’s worth in the world.

Be that as it may, Operation Kashmir is now in its second phase. It’s a phase when at some stage the Modi government would’ve to consider lifting the ban on internet, freeing thousands of politicians, activists, businessmen etc who unknown to their families are lodged up in and outside Kashmir. The present clampdown in Kashmir can’t go on forever. At some stage, elections would’ve to be announced and before that happens, the government and security forces would’ve to pull themselves back in the trenches. Leaders of regional political parties– Abdullahs and Muftis–would need to be freed.  Longer it’s delayed, faster India would lose the world which is now standing next to it.

Or, Modi could act indifferent to the world. The world today is wooing him not because it’s convinced of Kashmir being an internal issue but because it wants India by its side. West, in particular, is wary of China and sees India as indispensible in halting the Dragon’s march. India’s market and the growth story is no less attractive to them. Modi thus could keep the frills out, delay elections in Kashmir as long as he deems fit, keeps Muftis and Abdullahs in house arrest and to hell with the cacophony of the seculars.  He could put internal security above all other considerations, given the intelligence inputs.

Before the Houston event, Modi met a group of Kashmiri Pandits and assured them justice. Kashmiri Pandits–and their numbers run in lakhs–of course have a yearning to return to their homeland from where they were driven out in the 1990s. It’s been almost a generation since BJP has made it a part of their manifesto. The abrogation of Article 370 has raised hopes in the hearts of these Kashmiris.

But it won’t be easy. Muslim Kashmiris in the Valley today are incensed at the curb on their freedom and their knowns being lodged up in jails.  The post-1990 generation have no idea that theirs is a land where once syncretism prevailed and Muslims and Hindus lived check-by-jowl. They are likely to see returning Kashmiri Pandits as intruders and not rightful owners of their hearths and homes.  The natives would be seen as aliens. The reconstruction of their vandalized temples, as the Modi government has vowed, would be fodder to canons of insinuations and rumours.  Winning hearts without compromising in security or allowing Pakistan to stir up mischief with its mercenary terrorists won’t be easy.

Lutyens Media is ready with its texts, blurbs and headlines once clampdown is lifted in the Kashmir Valley.  These sob stories would be endlessly played. Modi would be shown to have committed a Himalayan blunder in tampering with Kashmir’s special status. Modi government would need to be on its toes to fight this war of misinformation. For every word of misinformation, it needs an article of facts to be put on public display. It would need nothing less than a separate Ministry against Misinformation on Kashmir.

Lutyens media has latched on to Imran Khan evoking the image of 2002 Gujarat riots. They of course won’t tell that every Court in the country has cleared Modi of culpability in the crime. (And it is not as if only Muslims were killed. The figures, released by the Congress-led government itself in 2005 put the figures as 794 Muslims and 254 Hindus killed).  Similarly, Lutyens Media has gone to length to highlight the dozen protestors who stationed themselves in front of Bill and Melinda Gates Foundation in Seattle, petitioning against the award to Modi on Swachh Bharat Mission (SBM). They won’t let you know that the Mission is almost 100 per cent successful. Nearly all villages of the country are now Open-Defecation Free (ODF). As Sandipan Deb wrote in the Mint: “The WHO study estimated that SBM Grameen is likely to have averted more than 300,000 deaths between 2014 and October 2019. BMGF’s survey found that in ODF districts, there were 32% fewer cases of diarrhea among children, 15% fewer cases of stunting, and 37% less women with lower body mass index, compared with non-ODF districts.”

Governance, like life, can’t be still. One has to think on one’s feet. Modi has dealt with the first phase of Operation Kashmir to the last detail. The second phase is fraught with dangers for now guns would have to be replaced with roses.