Pattanaik is quick to seize on the ‘Suitable Boy’ kiss: But Khajuraho analogy doesn’t fit 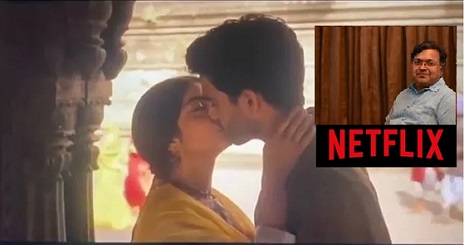 Devdutt Pattanaik has again pulled a fast one. His twitter timeline has an image of a sculpture, most likely from Khajuraho, where a kiss is being performed. He followed it with another one such image. He taunts “Hindutva” and he mocks saffron warriors including True Indology.

Pattanaik has done so in response to the Netflix serial “The Suitable Boy” being in crosshairs for showing a kiss inside a temple. His import is Hindu Dharma has always been nonchalant about such activities, that sex was a part of life and openly exhibited in public view. That the Hindu dharma today is hostage to Hindutva extremists. And that the right-wing Hindu governments is fuelling it. He kills the other bird with one stone in dragging saffron warriors and True Indology. Who’s the boss here now?

The misinformation is deliberate. It hides that temples like Khajuraho were built when Buddhism was the flavour. When Hindu dharma was in retreat. So, a show had to be put on devdasis and apsaras. Shringara too which was one of the Navrasas. Such images were put on exteriors of temples so visitors don’t lose sight of their roots. People still kept their padukas outside the temple. Inside was still sacred. Pious and devotional thoughts were still encouraged. Epics of Ramayana and Mahabharata still ran around the four corners.

Temples of past must be seen in their contexts. Cities came around temples and not the other way round. Temples were where artisans, writers, sculptors, poets could earn their living. The donation from the Kings and Rich kept the tradition, the folklore, the civilization alive. Music were performed. Debates happened. People gathered. The heritage received a fresh coat. Temples were more than just Gods.

But they were not Lodhi gardens or venue of sex escapades. They were still essentially abode of Gods. A place where a pure mind and a pure body could meet divinity. You were encouraged to wash yourself clean. Yogis did tapasayas, people took vows, sought forgiveness from the residents of heavens.  A Menaka was seen a temptation to break the sadhana of a Vishwamitra.

So it’s facile on Pattanaik’s part to spin a story which could show Hindutva as no different from Crusaders or Jihadis. Hindutva was a word coined by Veer Savarkar. He was an atheist and used it to define all who lived in India. This was to counter the assertion of Muslim fundamentalists of his times. “Hindutva” was a pamphlet published in 1923 when the Khilafat movement was at its peak and had gripped Mahatma Gandhi. Hindutva to him implied Hinduness of its people. It didn’t have religious connotations. Rashtriya Swayamsevak Sangh (RSS) also doesn’t use it in a theological sense.

Men like Pattanaik and Shashi Tharoor know how to please their masters. The narrative that India is in grip of religious extremism and Narendra Modi’s BJP is fuelling it. That Hindutva is the raging fire which would burn up Muslim homes, rape its women and leave its children destitute. That ultimately it would break up India in dozens.

The stance on “Suitable Boy”, if anything has come late. Netflix has been begging for censure for some years now. It surely is good business for Netflix to stoke controversy and there is no better way than to show the alleged Hindu extremism. Everyone watches the show, money keeps raining and those who promote Netflix—Left-Liberal moneybags of course—have their hands full with bounty.

Pattanaiks surely help in confusing Hindus. To sow division in ranks. To earn one more invitation to Indian consulate in Canada (never mind he would never praise Modi government for this show of Liberalism). One more pre-order of a million on next book.

So folks, no kissing in temple for me. As a twitterati puts it: There are nude paintings in Roman Catholic Churches. It doesn’t mean you go as one. So, no overlooking the agenda. No public relations exercise from Hindus. We would scream and we would exhort for that’s the only way we could throw off the weight of centuries. To strain every sinew of ours, to exert every vocal cord at our command. If we look bad, too bad.