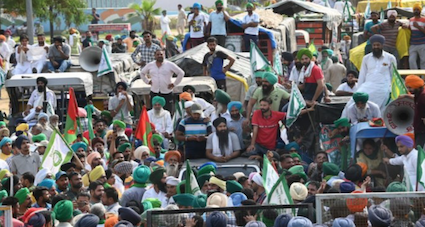 Punjab farmers are now up in arms against ruling Aam Aadmi Party (AAP) in the State. Various farmer unions camped themselves up at the Chandigarh-Mohali border and by the looks of it, they having carried ration, beds, fans, utensils and cooking gas cylinders, this protest is up for a long haul.

Various farmer unions want increased bond on wheat, besides permit to sow paddy from June 10. Farmer leader Jagjit Singh Dallewal said if the grievances of farmers were not redressed, they would break the barricades and move towards Chandigarh.

“It is the start of our struggle in Punjab and it will continue till our demands are met. Only 25 per cent of farmers have come here so far. More will come on Wednesday. It is a do or die battle,” said Dallewal.

The farmers’ demands also includes guaranteed Minimum Support Price (MSP) for 23 crops including maize and green grams, uninterrupted power supply and removal of the ban on export of wheat.

The farmers’ unions did have a talk with CM Mann but there was no resolution which has resulted in the protest march.  Taking to Twitter, Congress leader Sukhpal Singh Khaira said, “The way Bhagwant Mann left the farmers in lurch and unattended by leaving for Delhi to meet Arvind Kejriwal it shows how much concern he has for the farmers of Punjab!

This is the same AAP which, incidentally, had supported the farmers’ protest through and through during their year-long agitation at the gates of the Capital.