Rahul Gandhi, your resignation is fooling no one 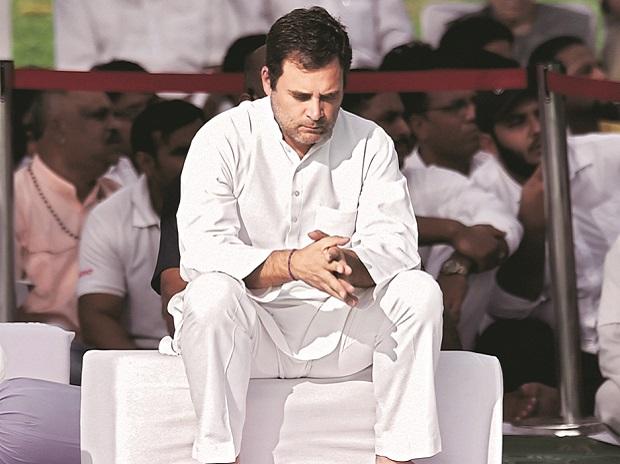 Rahul Gandhi is going nowhere. His resignation is an exercise in power without responsibility. True to his lineage, Mr Gandhi feels that he could fool all the people all the time.

He may or may not be president till July 10 when the Congress Working Committee (CWC) is likely to be dissolved and a new one formed. An interim president, Sushil Kumar Shinde or Mallikarjun Kharge, both nearing 80, would be asked to usher in a new Congress. Nobody gets a penny for predicting that Sonia Gandhi and her kids, Rahul and Priyanka, would be a part of it. Nobody would receive a dime too for predicting that the likes of Anand Sharma and Ghulam Nabi Azad, would still be doing the errands for them.

For a month and half, since the 2019 results came in and a Congress-mukt bharat became a reality—they don’t have a single seat in 16 states—the resignation drama has been an attempt to trade ridicule with sympathy. To hide the stink of a rotting corpse, a whiff of nostalgia has been floated. The young prince charming, all of 49, a bachelor who forsake good things in life and fought for his idea of India. The one who took on the might of Modi, BJP and RSS; who fought even as one by one all institutions were taken over, who traded hate with his brand of love, was an individual against the entire system.

Sure, the drama is well orchestrated. Before you could blame him for his party’s defeat, for his own humiliation in Amethi, for believing anti-Modi tirade would make up for the deficit in vision, for refusing allies only because a few states fell in his lap before the 2019 polls, for courting Hindus and losing his Muslim votebank, Mr Gandhi took the sting out of the horde at his gate by showing he is disarmed. How could you now punish a man who has swung an axe on his own neck?

Make no mistake: Gandhis are only worried about themselves, not about Congress or India. It’s only a bail which is standing in between Gandhis and jail. Priyanka Gandhi-Vadra has the additional worry on her husband, Robert Vadra meeting the same fate. They are pariahs even to Mamata or Mayawati or Akhilesh Yadav. Muslims no longer trust them. Shunned by public, ostracized by politicians, they can only worry about their skin.

Gandhi’s letter would’ve been hilarious if it was not tragic. He claims every institution in the country—judiciary, press, election commission etc—has been taken over by the Modi government. That’s not music to the ears of judiciary who intervened at midnight to allow Congress the batons of Karnataka. Which suffered the indignity of impeachment. Mainstream press which never wrote a single word against Gandhi. Election Commission which was reluctant to allow repolling in West Bengal.

“It’s now clear that our once cherished institutional neutrality no longer exists in India,’ Really? Was judiciary or press neutral during the Emergency? Or the august office of president? Who overturned Supreme Court on Shah Bano case? Who had taken over India’s institutions in the past?

In many ways Rahul Gandhi is inconsequential. He is an individual busy saving his skin. The bigger question is who saves Congress? Who saves the Grand Old Party when its’ very saviours are busy digging up its grave.