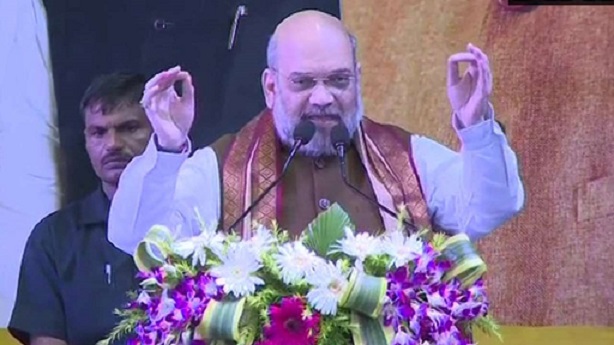 Since Lutyens Media—Times of India, Indian Express, Hindustan Times and The Hindu—is so hopeless, I took to computer, to read the local daily, The Telegraph and catch the action from ground in Kolkata this morning.

The event I was excited about was Home Minister Amit Shah’s visit to the capital of Bengal—the first since the 2019 Elections in May which all but buried the ruling dispensation of Trinamool Congress. Shah was visiting Kolkata and inaugurating a pandal of “Durga Puja.” He later addressed a crowd of 11,000, mostly BJP workers, at Netaji Indoor Stadium on Tuesday.

I took to The Telegraph after the Lutyens Media failed me in terms of details of Shah’s address. Every line in Lutyens Media was honed in on the National Register of Citizens (NRC), a Supreme Court-mandated exercise which was taken recently in Assam and excluded over 19 lakh citizens.  Lutyens Media, not one of them, sees logic in throwing out infiltrators which the NRC is all about. Instead, the projection is that the right-wing Centre is hell-bent on making life miserable for Muslim minority. What is infiltration is persecution of minority Muslims in their eyes.

But I found The Telegraph worse. It has put Amit Shah’s speech as lead story of its edition today. The newspaper prepared me for its bigotry with the headline itself: “Shah shifts focus, assures all but one.” In the text, it quotes Shah: “I assure all refugees—Hindu, Jain, Sikh, Buddhist and Christian—that the government of India would not ask any one of them to leave the country.” The newspaper then adds a line of its own: “The home minister of the Union of India did not mention one community.”

The Telegraph of course was stoking the fears of Muslims. That they are being targeted by a “communal” right-wing government in the Centre. It was pulling wool over the eyes of its readers by blurring the distinction between refugees and infiltrators; between Citizenship Bill and NRC.

Citizenship Bill is aimed to provide shelter and dignity to lakhs of Hindu, Jain, Sikh, Buddhist and Christian refugees who have fled Pakistan, Afghanistan and Bangladesh due to religious persecution. NRC, on the other hand, is an exercise to stop infiltrators who have sneaked in into India and can’t be called refugees. In terms of definition too, refugees and infiltrators are two completely different things. Refugees are fleeing state persecution. Infiltrators are coming in with devious motives of their own.

But our newspapers are hell-bent in sensationalizing and distorting the ground reality. One has no way of checking Bengal chief minister Mamata Banerjee’s claim of 19 deaths so far due to NRC fears since her writ runs large in the state. But clearly she is desperately pulling all stops to ensure her Muslim vote bank stays intact. Politicans, who project themselves as protectors of a community, are known to heighten their fears and insecurities for their own benefit. What if lives are lost and families ruined in the narrative manufactured by them?

Most newspapers have given a miss that Amit Shah called out Mamata Banerjee on her doublespeak—she was the one who on August 4, 2005 demanded infiltrators be thrown out of Bengal in the state assembly. Now the shoe is in the other foot!

They have also left out Amit Shah’s perceptive comments on Bengal of today:

That at the time of independence and now, Bengal’s industrial production (27% then, 3.3% now), industrial jobs (28.9% then, 4.2% now), medicine production (70% then, 6% now), bank deposit numbers (22% then, 6.3% now) have shown  staggering fall.  That, those were the years when Bengal was known for its literature, music, religious and spiritual leaders, and scientists? “Where’s the Sonar Bangla we all dreamt about,” Shah had thundered, “Is this why you removed Communists?”

Shah touched a raw nerve of ruling dispensation of Bengal when it reminded the gathered audience in his unique, compelling way. “Are you happy that Article 370 is abrogated,” he asked the jam-packed stadium. As a deafening noise of approval went up, Shah chipped in with his punchline: “But do you know that TMC (MPs) walked out in protest when Article 370 was being abrogated in the Parliament,”?

The rising cultural assertion among the masses of Bengal led to BJP cornering 18 seats to 22 of TMC. “Now no one stop you from delaying the “visarjan” in Durga Puja…nobody has the guts to stop Durga Puja  or Basant Puja, Saraswati Puja, Ramnavmi and Janmaashthmi,” said Shah which struck a chord with the audience. As is known, Mamta Banerjee postponed “visarjan” on more than one occasion to let muharram be observed on its scheduled date. Shaken by the 2019 general polls, she is now rushing and practically inaugurating every major Durga Puja pandal in the metropolis in her bid to woo Hindus.

Political battles are ok and certainly partisan but the nation is hurt when newspapers forsake their objectivity and neutrality. None have bothered to bring the larger picture of Shah’s address to its readers. Instead, the method is manipulation. None have questioned the shambolic law and order situation in the state. None have bothered to train their investigations on Narada, Sharada or Rose Valley scams. None have pointed out that at least 30 BJP members have been killed in the fourth months since 2019 General Polls.

(Post script: For the benefit of readers, here’s the link where you could see Amit Shah’s address in entirety).