Sheikh Hasina’s visit: Who are her two friends she would miss on this trip? 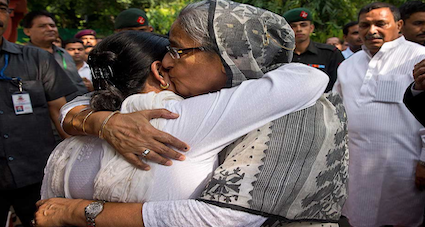 Bangladesh Prime Minister Sheikh Hasina would be in New Delhi from tomorrow on a three-day official visit during which defence cooperation and regional stability is likely to be the focus of her talks with Indian counterpart Narendra Modi. Apart from meeting the Indian leadership and signing couple of key agreements with India, she would be dearly missing her two old friends- Mrs. Suvra Mukherjee and her husband and former President of India, Pranab Kumar Mukherjee.

Mukherjee couple had given  Sheikh Hasina shoulder to cry when she was living in Delhi on political asylum from 1975 to 1981. She was here as her father and the first President of Bangladesh Sheikh Muzibur Rahman, mother, three brothers and other close family members fell to the bullets of assassins at their Dhanmandi home on August 25, 1975 in Dhaka.  She escaped certain death as she was in Germany with her scientist husband, M. A. Wazed Miah, and kids.

Of course, due to very hostile government back home, there was no question of her going back to Bangladesh. That was when the then Indian Prime Minister Mrs.Indira Gandhi had given her asylum here. Mrs. Indira Gandhi and Bang Bandhu Sheikh Mujib Rehman were close friends.

As and when Sheikh Hasina has visited Delhi, she has always made it a point to spend time with Mukherjee family and recalling old days when she was staying in Pandara Park flat and Mukherjee family used to live at the Talkatora Road. In Delhi, it is said that  Sheikh Hasina and Suvra Mukherjee became great pals. They used to have long discussions on Art,Music and Literature. Both of them were fond of the work of Gurudev Tagore and Kazi Nazrul Islam. Pranab Kumar Mukerjee and Hasina’s late husband, M. A. Wazed Miah too were very close. Wazed was a nuclear scientist. He was engaged in research work at the New Delhi based laboratory of Atomic Energy Commission of India.

During her stay in Delhi, Sheikh Hasina has even started working for Bangla service of All India Radio (AIR). She was quiet and almost an apolitical person though her father was the founder of Bangladesh.  It is said thats he was very regular there.

In capital, she has first lived at 56 Ring Road, Lajpat Nagar-3 and later at Pandara Park till 1981. Actually, this house was the High Commission of Bangladesh before it built its own building in Chankaypuri around 20 years back.

Well, even the kids of Sheikh Hasina and Suvra Mukherjee virtually grew together. Hasina’s   two kids Sajeeb Wazed ‘Joy’ and Saima Wazed  ‘ Putul’ and Suvra’s kids Sharmistha Mukherjee, Abhijit Mukherjee, Indrajit Mukherjee  used to play together.  Saima Wazed and Sharmishta Mukherjee are very close friends even now. Sharmishta Mukherjee was  a Congress leader. Now, Saima Wazed is based in Canada and Joy is settled in US. Joy attended boarding school  St. Joseph’s College in Nainital and Kodaikanal International School in Palani Hills, Tamil Nadu. He studied computer science at the University of Bangalore; then transferred to the  University of Texas at Arlington in the United States, where he graduated with a B.Sc. in computer engineering.

Recalling her couple of meetings with Sheikh Hasina at Pandara Park, D.K. Bose, President of Hindustan football club, said “When she was in Delhi, her party leaders used to visit her to persuade her to take up the mantle of Awami Party. She was not very keen for it. Though she later agreed to take up the leadership position of Awami party. While she was in India she was elected as the head of Awami league.  In  Delhi, Al Khatib used to work as assistant to Hasina. Khatib had also authored a book ‘Who killed Mujib?’. It is still considered as one of the most authentic account of killing of Mujib and his family.” D.K. Bose recently passed away. He was one of the organizers of big and vociferous demonstration before the Pakistan mission in Delhi when Pakistan forces were on rampage in the then East Bengal in 1971.

“Bangabandu Sheikh Mujibur Rahman was a dear friend of India and a towering leader. As a mark of our respect and deep admiration for the father of Bangladesh, a prominent road in our capital city has been named after him,” PM Modi had said.

Agreed, Delhi and India has changed greatly since Sheikh Hasina was here. Yet, who can erase her memories of those days and years when Delhi was her home. And she is visiting her second home again.

If Nehru’s abode is a memorial in Delhi, why not one of Sardar Patel?

But for this man, Amitabh would’ve never been an actor!