The so-called “ganga-jamuni tehzeb” and its’ terrible reality 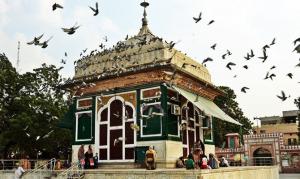 (I read an absolutely horrendous editorial in Times of India on April 13, 2019. It’s an apologist questioning why Jallianwala Bagh must be raked up after 100 years. Who would it help except bursting the old wounds?

In a perverse way, I am also thankful to this piece. It ended my own confusion. My studies have convinced me that the so-called “ganga-jamuni tehzeb” in India is fake. But I’ve always hesitated in rupturing the delusion. Why put living Indian Muslims in trouble by bringing out the fake “ganga-jamuni tehzeb” narrative?  Who would it help except inflaming the communal passions?

But the Times of India piece has broken my spell. Facts must not be held back. For if we do, Hindus would never know of their past. If they don’t know their past, the present and future is devoid of identity and full of confusion and guilt.  That’s the same project of Break-India forces. In what way then I am being any different? Could I be said to be fighting the Break-India forces???

My knowledge of fake “ganga-jamuni tehzeb” doesn’t prejudice me against my Indian Muslim brethren. But I am not holding myself back any longer. I expect readers to question this three-part series and if convinced, still not hold it against present-day Indian Muslims. But let’s refuse to be a fodder to Break-India forces.

Harsh Narain (1921-1995) is little heard of. He was an author and professor, among others in Banaras Hindu University and Aligarh Muslim University. He has done important work on Islam and Hinduism, most of which are unavailable. NewsBred happen to chance upon one of his book “Myths of Composite Culture and Equality of Religion” which is an essential read to ignite the debate on the so-called “ganga-jamuni tehzeb” of India.

NewsBred has spread the essence of this book in three sections, the first one of which is condensed and produced below in Harsh Narain’s own words):

“An impression is sought to be created that all that is good and significant in Indian culture is due to either Buddhism or to the Muslim rulers.

“Culture is one of aristocrat and others of masses. It is aristocrat which remains defined. Later mixes freely with others.

“Being influenced by something is one; being composite is completely different.

“Today western culture is exercising a far greater influence; so should we say we are composite culture?

“Muslims and the so-called secularists seldom talk of the great pre-Muslim culture, except to malign it.

“An alien culture grafted upon a country subjugated by it doesn’t deserve to be called indigenous culture or part thereof.

“Pre-Muslim Indian history nor Hindu heroes and savants have been honoured by the Muslim community. Only Nehru is praised. Even “Azad” has had no word of appreciation for the Hindu men of destiny, ancient or modern, with the natural exception of Gandhi.

“Muslim culture invaded Indian culture not to make friends with it but to wipe it out. Its declared aim was Islamization and method Creschentade/Jihad which changed its contours according to changing circumstances. Muslims were never an integral part of Indian culture—rather an anti-culture or counter-culture in India’s body politic.

“Muslim and Christian cultures were in the nature of tenant-cultures, parasitic cultures, or out-and-out counter-culture. Muslim system of education, current in thousands of madrasas scattered all over, act as a bulwark for what S. Maqbul Ahmad calls “political fanaticism” and turns out still more thousands of Hindu-haters per year. To this end, their inflated sense of identity needs also to be brought within limits.

“The great tradition of the rishis and munis, ascetics and saints, tirthankaras and Buddhas, Siddhas and Yogins, Valmikis and Vyasas, Ramas and Krishnas, can’t catch the fancy of Christian and Muslim hearts. All Indian history prior to the advent of Islam or Christianity becomes an age of darkness for the convert. Indian heroes become irrelevant if not villains outright.

“Spain happens to be the only country which having suffered the thrall of Islam for some seven centuries succeeded in overthrowing it, reasserting its Christian identity and bidding good bye to Muslim culture. It is in India where those who were out to uproot the whole gamut of our religio-cultural traditions are hailed as national heroes.

“No Indian philosopher has ever shown any awareness of Muslim religion or philosophy right from the dawn of Islam to the inception of British rule.

“Vice versa also, barring Akbar, Darul Shikoh, Zayn al Abidin, Faydi, no Muslim theologian, thinker or even Sufi has ever thought it fit to have a peep into Indian religion or philosophy while formulating his views.

“Even the British didn’t think with Indian philosophy and culture as one of Muslim: Everybody was convinced that even though Muslims had permanently settled in India, their religion, philosophy and culture –in fact their entire way of life and thought—was alien; that their rule was a foreign rule. That their centre of gravity belonged elsewhere.

“That is to say that Muslim culture was taken to be having not an essential or organic but only a spatio-temporal relation with Indian culture.

“Pakistan was made only on this ground.

“In 1947, Muslim society seceded on the basis of separate culture and nation. Now truncated India is said to belong to Hindus and Muslims alike and its’ culture being a composite culture.

“Yes, give and take was there. Peaceful, constructive is the sine qua non of anything composite. But here it was nothing.

“The ethos of Islam is too radically different from, exclusive of, and incompatible with that of Hinduism and its attitude too un-compatible. In fact, Quran and the Prophet forcefully forbid the Muslims to befriend the Kafirs (Al Imran 3, 28, 118, 119, and Nisa (4) 144, al Maidah (5) 51, 57), even the best of whom are inferior to even Muslim slaves (Al Baqarah (2) 221).

“The prophet goes to the length of ruling that one who follows the example of some other people actually belongs to them (Man tashabhanda bi-qawimin fa hua min-hum).

“We do have an eclectic architecture, remodeled for the natural tendency to imitate the ways of the powers. It has taken a physical level and has had nothing to do with the meaning and motif, in which alone does art consist qua art. The Muslims have been religiously indifferent to, if not contemptuous of Indian sculpture. Thanks to the taste of the Sufis, the Muslims took some fancy to Indian music. The main gamut of Indian literature too has been un-tinged with Muslim literature and historic-cultural allusions.

“Poets like Jayasi, Rahim and Raskhan are rare. So are saints like Kabir, Nanak and Gharib Das. They did attempt a synthesis of two cultural streams. But it was short-lived. They failed to be popular amongst and influence the Muslims.

“Urdu language and literature are not the result of intermingling of Hinduism and Islam but reflect the Muslim image in Indian garb whose yarn is predominantly Islamic and whose embroidery, too, is imported from without. Iqbal seems to be sincere in his confession: “Ajami Khum Hai to kya may to Hijazi hai meri; Naghmah Hindi hai to kya lay to Hijazi hai meri. (So what if the barrel is Persian? My wine is of Hijaz; So what if the song is in Hindi? My tune is of Hijaz).

“On the whole, Urdu culture could not cross the deadline of Muslim culture. Sauda, the classical Urdu poet, for example, refers to India as an unholy land:

“Gar ho kashish-i-shah-I Khurasan to Sauda; Sajdah na karun Hind ki napak zamin par (if the king of Khurasan draw me near, I would not bow to God on the unholy land of Hindustan).

“Iqbal for instance is all praise for Aurangzeb and all condemnation for Akbar and Dara Shukoh. “Aurangzeb was the last arrow in our quiver in the war between Kufr and Islam. Akbar sowed the seeds of irreligion which grew in the character of Dara…but the lightning of his (Aurangzeb) sword burnt down the barn of irreligion and lighted the lamp of Islam in our convivial assembly.’

(Next: Part 2:  “The Hindus were saleable, enslaveable and slayable at will”)