So what is the rest of the chat Kishor and Lutyens Media talked that we don’t know about? 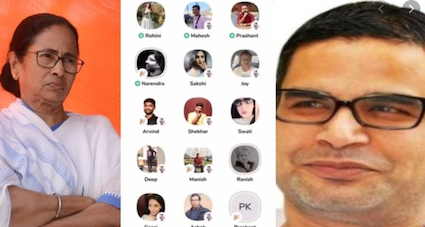 I often say that mainstream media is not neutral. That it has three weapons against common citizens like you and I: Propaganda, Malign and Brainwash, It would help you clear you foggy glasses if you read your morning newspapers with such lenses. If nothing, it would make you a responsible citizen. India would be thankful.

So, the weekend began with a private chat between Prashant Kishor and a few select from Lutyens Media in public domain. Hear them if you haven’t: It predicts BJP’s victory in Bengal; confesses of Muslim appeasement in last 20 years; concedes Modi cult; that Hindus, Dalits and Matuas (/East Bengal-origin) are voting en masse for saffron party etc.

Once Social Media began buzzing, and there was no way it could be denied, i.e Propaganda and Malign became pea darts,  Brainwash kicked in. The protagonists claimed that Muslim appeasement is a lie; that Trinamool Congress would still win Bengal polls and that the leak was selective.

Arfa Khanum Sherwani took to twitter and literally said if Muslims have been appeased, my pup is pooping gold biscuits:They don’t have jobs, they earn peanuts, they don’t reach universities.

If Muslims had not been appeased, this country wouldn’t have lost its land in Punjab, Bengal and Kashmir. Kashmiri Hindus out of Valley wouldn’t have gone unpunished. That separate minority ministry in a secular country is only appeasement.

If Arfa is really worried on Muslims she should say it as it is: That don’t give more births than you could feed; that madrases is no substitution to schools of science and physics; that Sikhs, Jains, Parsis are minorities too but not a rarity in our Universities; that infiltration is only going to hurt the country you were born and would be buried in.

Every Indian Muslim should look closely at their advocates like Arfa and Lutyens Media. They are not speaking of their upliftment, they are BRAINWASHING them to be where they are: In the dumps, doing gig jobs, with religion and not progress as their only succour. They are not speaking for Muslim women. They are helping build Muslim hatred against majority Hindus when their situation is of their own making. If I was an Indian Muslim, Arfa and its Lutyens Media, and the lobby of politicians and their Left-Liberal masters, are my enemies in disguise.

Prashant Kishor, in the wake of leak, is doubling down that Trinamool Congress would win Bengal.  And that he would leave the space if it doesn’t turn out that way

This falls into my definition of BRAINWASH tactics. The tape is authentic, you can’t MALIGN or do PROPAGANDA. So, you use your Brand to sow confusion in common citizens. Now this bluff, amplified in mainstream media, is to brainwash you. They know you and I don’t have jobs of winning elections, be a political strategist or be fattened as they are by their masters. We have domestic chores to attend, rush for our jobs/shops and keep the kitchen running. So this is my 30-second vaccination against this brainwash virus.

The third chortling is: The Leak was selective.

And for that we are grateful to those who leaked the chat. I mean what else we need to know beyond that (a) Muslims are appeased in Bengal; (b) there is anger against Mamata; (c) Bengal’s majority is sold on Modi cult; (d) that Hindus, SCs and Matuas are voting en masse for the saffron party; (e) and BJP is winning in Bengal.

Let me ask you Prashant Kishor, and I promise to publish everything you say verbatim, no questions asked: (a) Did the rest of the chat talk about infrastructure and industries in Bengal in last 10 years; (b) about the culture of political violence; (c) about mass desertion in Trinamool ranks and whether this is all myth perpetrated by Modi and Shah?

If not, then there is nothing to salivate about the rest of the chat. It’s a group which is self-serving and which doesn’t have the welfare of Muslims or India at heart.

You and I readers, don’t need to know anything else.