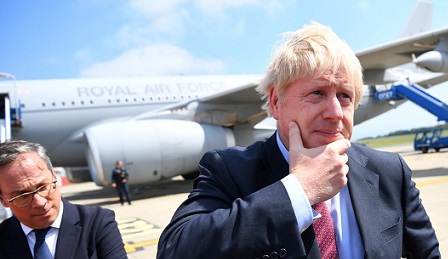 There is a reason why United Kingdom’s prime minister Boris Johnson shouldn’t be allowed to visit India for the Republic Day celebrations.

While the Indian health bosses get into the huddle this Monday morning to fence itself against this new onslaught from United Kingdom, there is no reason not to withdrw the invitation to Boris Johnson.

I of course am referring to the new Coronavirus strain currently plaguing Great Britain which is officially declared to be 70% worse than the existing strains—named VUI2020/12/1—and which has shut Great Britain indefinitely.

No more Christmas celebrations, no New Year festivities as Johnson himself announced on Sunday that one third of Britain would stay indoors and could meet only one person and that too on only Christmas day, December 25.

“As prime minister, it is my duty to take the difficult decisions, to do what is right to protect the people of this country,” Johnson said, “Given the early evidence we have of this new variant of the virus, and the potential risk it poses, it is with heavy heart that I must tell you wen cannot continue with Christmas as planned.”

British health secretary Matt Hancock has said that the “new virus was out of control.”

European countries are stopping their flights on the tarmac to England. The Netherlands has imposed a ban; Belgium is following suit. Germany has not only stopped flights from Britain but also considering doing so to flights from South Africa where too a new variant of Coronavirus was discovered. Italy too it is learnt is joining the ban and so is Austria.

Which countries have banned air travel from the UK?#UKLockdown #COVID19 pic.twitter.com/Tdm1tfQgup

It’s unlikely India won’t ban flights from the United Kingdom. It would be a horror otherwise since Scotland itself is pulling shutters down against the rest of United Kingdom.

The prime ministers or presidents in today’s time travel with an entourage which extends up to 100 people and there is no reason why Johnson should be allowed to land in India. There are press secretaries, media, even officials of government departments and business leaders. Besides, security, intelligence and other paraphernalia.

It’s too much of a risk in order just not to look bad hosts. India’s Republic Day celebrations is a sombre enough moment not to risk the “Republic” which has already crossed a crore of Coronavirus positives and which only yesterday was talking of timeline to release the vaccine for its distressed population, second largest in the world at 1.39 billion people.

An attendant worry of course is what happens to the Oxford (AstraZeneca) vaccine which is being produced in Pune by Serum Institute of India (SII) and which is heading the queue of vaccine-makers to be administered on Indians.

Modi government has already planned out who to give vaccine to on basis of priority and even Election Commission (EC) is offering a helping hand to take the vaccine to interiors.

All this could go to waste if this new strain arrives in India and complicates India’s health and the measures which are about to be unleashed to tide over the crisis.

India must stop all flights from United Kingdom; all ships which come via the Cape of Good Hope or Nile (Suez Canal), so to speak, or even carry British citizens. Too bad, it must include Boris Johnson. Or it would be return to days of Colonialism where India was helpless to stop the state-sponsored pirates.