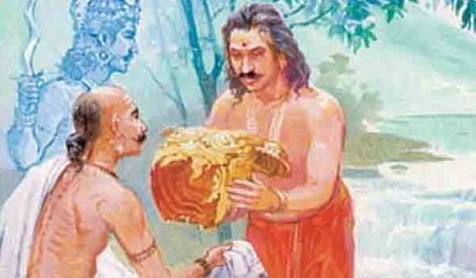 (This is third piece a long series on the epic Mahabharata, marking legends about the venue which exist to this day, timeless in glory and reverence. The first and second could be read here and here).

It was the 10th Day of the Kurukshetra War and Guru Dronacharya has passed and Anga Raj Karna appointed the Commander in Chief of the Kauravas. On the 09th Day night he gets a vision from his Father Lord Sun that Lord Indra will come asking for his Kavach & Kundal in order to protect his son Arjuna.

On the 10th Day morning when Karna arrived on the banks of the Sannihit Sarovar for his daily prayers and then as per his Vision Lord Indra appeared before him in disguise and asked for his Kavach & Kundal, which Karna known for his magnanimous attitude of donating and not letting anyone go empty handed from his door, gave it away. It was at this Sannihit Sarovar that this episode took place. Indra Dev blessed him that anyone hence forth taking bath in this Sarovar will be washed of their sins and would lead a pious life.

This sacred water reservoir (image above) located at Thanesar inside the City of Kurukshetra is believed to be the meeting point of seven sacred Sarasvatis. The sarovar, according to popular belief, contains sacred water. Bathing in the waters of the tank on the day of amavasya (night of complete darkness) or on the day of a Solar Eclipse bestows blessings equivalent to performing the ashvamedh yajna.

Bathing in this sarovar is believed to offer peace to wandering and unhappy souls. Prayers and pind daan, a memorial service for the dead, is performed here. There is a Sun Temple located here in the Memory of this Episode glorifying Karna and his father (Surjo Deb).

It was here that The Great Sage Dadhichi denounced his body on the request of Lord Indra, king of demi gods so that the famous weapon Vajra could be created for killing the notorious and giant Asur Brityasur.