They want to inflict a million cuts on Modi, Yogi: But lies don’t go far 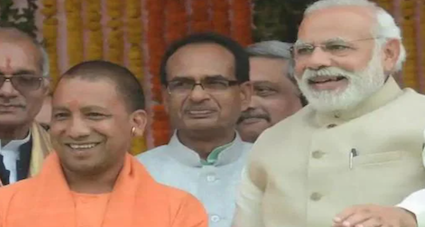 Mamata Banerjee on Thursday spewing venom on Prime Minister Narendra Modi for treating the chief ministers as “puppets” isn’t an isolated incident. It’s a part of a cohesive strategy.

We have the instances of Delhi’s Arvind Kerjiwal—“live telecasting”; Jharkhand’s Hemant Soren’s “Mann ki Baat” jibe and now Mamata Banerjee’s uncalled for reaction when the chief ministers were only allowed to be privy to interaction between the prime minister and district magistrates.

Her commitment to a dialogue with the Prime Minister has been manifest in her absence over last several such interactions. And when she appears, it’s for a political agenda, and ostensibly nothing to do with the plight of her citizens.

The opposition has pulled all stops to target Modi and to the length the Lutyens Media is going to amplify it has few parallels.

Arvind Kejriwal kept harping on “oxygen” till the facts began tumbling out. It’s now on “vaccines” which is crowding space in our newspapers after its posters ran out of walls in the Capital. We don’t know if the Delhi government has done anything on its part to buy vaccines or float tenders as other states have done. In between, he is busy digging up the good turf with Singapore which has proved one of India’s many good friends in these difficult times. Of course, Lutyens Media has covered up for him on Singapore like a fig does to a sensitive part.

When Lutyens Media is struggling for a fresh quote from these political vultures, it pulls out a Pratap Bhanu Mehta from its closet. He has an edit in Indian Express today, firing blank bullets on Yogi Adityanath. He is hoping for a break in the “shroud of silence” on UP: When all he needs is clear eyes and a clean heart. The fifth largest in the world if it was a country—23 crores population—Uttar Pradesh is testing more than any State (3 lakhs per day); has better recovery (91.4%) or positivity rate (2.4%) and its peak of 37,000 cases per day is now hovering at 7,000 a day. The Yogi government is setting a model for India’s villages.

Just try remembering how mobile Yogi has been from district-to-district in this pandemic even while himself recovering from its bout. That’s if you have seen it covered in Lutyens Media and suitably contrasted with the honourables Kejriwals, Mamatas and Thackerays.

This eco-system relies on an age-old maxim: “Hate-porn” in public space would get you the victim you want. They clearly are the lords of communication channels in India, be it traditional, digital or social media. It’s a very concerted bid by them to capture the minds and hearts of Indians.

The only trouble is, when you attack you leave your defences down. So brazen and naked is their attack, that citizens have begun to identify them as working against the interest of India, and dare I say, pandering to the wariness of the Muslims.

A Modi never asks for Hindus to vote for him as Mamata does to Muslims. He doesn’t call out “protesting farmers” as super-spreader like they do with “Kumbh Mela.” He goes about his oxygen and vaccination dharma, calling out all stake-holders in this fight even though those at the other side of divide prefer personal attacks and hurting India.

They want to inflict a million cuts on Modi and Yogi: But lies don’t carry far.