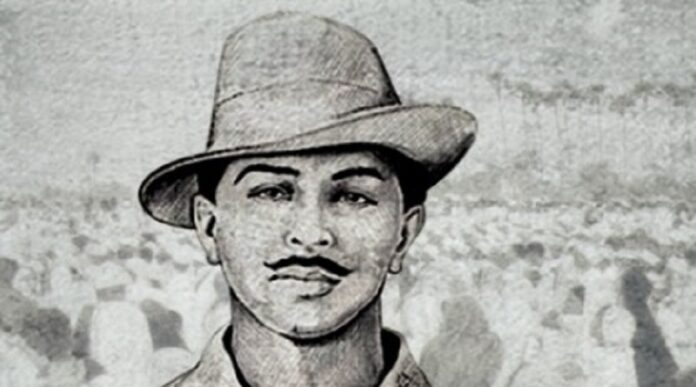 Bhagat Singh is a hero to all Indians. The man made sure he was caught and hanged to death in 1931 in the hope it would rise countless youth against the British yoke. He was only 23 and arguably a bigger legend than both Mahatma Gandhi and Jawaharlal Nehru in his closing days. The nation hoped as one he would be pardoned, and not executed.

As we celebrate his 112th birth anniversary (September 28, 1907), the cacophony is back to own him up.  Marxists claim him to be one of their own; Congress cite countless instances of how much Pt. Nehru admired the revolutionary in public and his atheism is cited as rebuff to RSS and communal politics.

Times of India has a middle in its edit page today where a Bhagat Singh researcher, Prof Chaman Lal has been interviewed by one Manimugdha Sharma. The piece begins and ends with Bhagat Singh being a proud son of Marxist/socialist ideology but doesn’t miss out in rubbishing Veer Savarkar for his silence on the martyr. Predictably, Bhagat Singh’s distaste for casteism is showcased too.

Is this the binary we want Bhagat Singh to be reduced to where everyone is apportioning a piece of his corpse? Where facts are twisted to suit an ideology? Where Bhagat Singh is revealed a Marxist but hidden is the fact that he never joined Communist Party of India? Where Savarkar is demonized for his silence but cloaked is the truth that Bhagat Singh never said a word against Savarkar and indeed completely read the latter’s work, “Hindu Pad Padshahi”? Where Bhagat Singh is mentioned an atheist but masked is the evidence that Swami Dayanand Saraswati and Arya Samaj exerted a great influence on him? Where Mahatma Gandhi is cited by Prof Chaman Lal to have “made efforts” for Bhagat Singh’s release but veiled is the historical reality that Gandhi faced black flag demonstrations by angry youths in Karachi who shouted “Down With Gandhi” in the wake of latter not demanding clemency for the condemned revolutionary? Where Jawaharlal Nehru is shown to be an unabashed admirer of Bhagat Singh but disguised is the truth that Pt. Nehru snubbed revolutionary Chandrashekhar Azad when the latter sought his help that Bhagat Singh not be hanged?

To satisfy their conscience—DoubleThink is the hallmark of Commies as George Orwell famously told us in Nineteen Eighty-Four—the interview does have a question on why Mahatma Gandhi never sought a pardon for Bhagat Singh which the nation prayed for. Prof Chaman Lal tells us that “Even if Gandhi had made it a point not to have the Gandhi-Irwin Pact without the commutation of their death sentences, the revolutionaries would not have accepted and compromised at their end.” Really? So I must not be blamed for adultery because it was this loose girl who threw herself on me. Is this the logic you’re going to sell to your wife?

There is this wonderful piece in Swarajyamag where Prof Irfan Habib is shown indulging in similar skull-duggery on Bhagat Singh. Since we can’t show Prof Chaman Lal and Manimugdha Sharma a mirror on the folly of their concert, let’s urge them to read it. Let’s not assume they have no shame. (Even though Times of India and its edit pages are now at the mercy of Marxists).

The oversell of Prof Irfan Habib—a JNU professor like our very dear Chaman Lal—was the soft corner Pt. Nehru had on Bhagat Singh. He cited countless instances when Pt. Nehru was effusive in his praise for the nationalist. The Swarajymag piece laid bare the fact that Nehru never put his foot down when Gandhi-Irwin Pact was being ratified by the Congress Working Committee to which he was the president. Subhas Chandra Bose didn’t mince his words: “The responsibility of Pandit Nehru is very great. Besides being the President of the Indian National Congress, he was the only member of the Working Committee who could be expected to understand and advocate the Left-wing point of view…”

Non-partisan historians believe that if Gandhi had wanted he could’ve persuaded Irwin—with whom he shared a good rapport—to release Bhagat Singh. There are elaborate mentions of Gandhi-Irwin dialogue on Bhagat Singh in the Swarajyamag piece. Also, Nehru defended Bhagat Singh in public but in reality left him on wolves’ table. (We in NewsBred have an archived piece where Bhagat Singh’s nephew lambasts Congress for treating revolutionaries as terrorists!).

Those who are innocents would be startled on how disappointed Chandrashekhar Azad was when he sought out Nehru on Bhagat Singh’s clemency. The Swarajymag piece also details the version of Manmathanath Gupta, a fellow revolutionary of Bhagat Singh, on the attitude of the Congress leaders, including Gandhi and Nehru. Gupta mentions the betrayal by the two leaders and is quoted thus: “…Nehru completely misrepresented the revolutionaries, charging them with fascist tendencies” So Nehru viewed Bhagat Singh and his fellow revolutionaries as fascists! But Chaman Lal tells us that the martyr approved of Nehru above Bose!

(Post Script: An advice to Times of India. Keep a tab on those who manage your edit pages. Or else it would be a hub for Marxist ideology as the Indian Express and The Hindu are. Your credibility would become a piece of fiction).