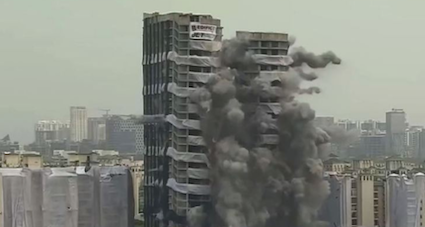 If you look deeper and closer at the videos of people cheering the demolition of these illegal towers, then there is a message from voters in it for our elected and selected representatives, on whether the voters are for or against such demolitions. People who have been at the receiving end of builder scams for decades can not be held guilty if they think that the Twin Towers demolition in NOIDA was a symbolic early Dussehra.

Will this message filter down, or rather up, to those who seek votes from the same category of cheering people? That depends – will the message get across that there are no builder scams without political participation. One feeds off the other. And both feed the media. Which other group, lately, has bigger ad spends than politicians and builders?

Thus, we see articles bemoaning the loss of what some term as a “national resource”, without looking at the deeper issues therein. The deeper issues, apart from the fact that those who booked apartments in these two towers have been or shall be duly compensated as per reports, is that the Law has not just prevailed but also been seen to prevail.

Today, it can be said with some amount of sardonic attitude but a cynical reality, that the future of the country depends on bulldozer operators. This is not a statement made in context with bulldozers being used as shovels for more efficient law enforcement wherever required. This is more in context with the way bulldozers are used to dig deeper basements and then in which are placed foundations and pillars for higher floors.

Take an example of pretty much any plotted habitat area in and around Delhi or most other cities. Original building bye-laws used to provide for about 50% or 55% built-up area, setbacks front, back and on at least one side, with a maximum permission for two-and-a-half floors. Natural sunlight was a fact of life and civic amenities were in line with the number of people living in such houses.

Today the same plots have 100% or more built up areas, zero setbacks, 4 or even 5 floors upwards and 2 below with stilt parking for purposes more than just parking cars. Ramps extend on to public roads, water and septic tanks are positioned next to each other underground, and often there are more guards on duty than floors in the tower.

The only redeeming factor is that the quality of construction is so poor that the buildings start sagging in the middle in a couple of years and as for the basements, they start filling up with dirty water of all sorts, which makes them almost useless for anything. We have also seen how apartment towers have collapsed within years of construction in different parts of India. All this adds up.

Which brings me back to the core point – will illegal constructions become an electoral issue in the near future going forward? As of now, it seems to be largely something impacting a small segment of people, but if illegal constructions continue to be bulldozed for whatever reasons – expect it to become, if nothing else, a localised electoral issue.

For which, a lot more media coverage will be needed of the sort that explains matters – which is not likely to happen, for the simple reason that the building industry happens to be one of the biggest advertisers.

This time around, however, there appears to be a groundswell. Faint, but present all the same, if you look at the faces of the people cheering.