US, China must avoid a new Cold War 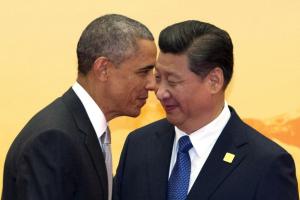 Chinese president Xi Jinping is in United States for a week-long state visit. This, at a time when the Sino-US relations are at its lowest ebb. Among others, one reason is China’s policy of One Belt, One Road. One of world’s renowned geopolitical experts, Shen Dingli dispels a few notions in this piece.

ince China proposed its ‘One Belt, One Road’ (OBOR) strategy two years ago, it has made significant headway. In the Eurasian area defined by this OBOR, some 60 countries have expressed their interest in partnering with this program. In addition to over two dozen Asian countries which have joined the Asian Infrastructure Investment Bank (AIIB), a new financial institution whose mission covers the OBOR, some European countries have also shown their intent to join so as to catch the opportunity to invest in this ambitious program of infrastructure connectedness across the Eurasian continent.

Despite this, advancing the OBOR strategy is not without challenges. Some have viewed it as China’s Marshall Plan with a long-term goal of gaining geopolitical preeminence in the Eurasian continent. In this context, the OBOR is also deemed as an economic countermeasure to the U.S. rebalancing in the Asia Pacific. The base line is that China will tap the opportunity of OBOR to expand investment in its extensive western neighborhood and sustain its growth rate, which is declining. China could use this strategy to hedge against potential contingencies if its sea routes become threatened. In addition, China could wield more political influence when the region’s economy becomes further dependent upon Beijing.

Therefore, some expect that with the progress of the OBOR strategy, a new geostrategic landscape would loom large in this part of the world. America’s foremost concern is, given the emergence of the OBOR, how to sustain its dominance in the Asia Pacific and the rest of the world. The U.S. is upset by the creation of an institutional tool such as the China-led AIIB and has challenged its transparency. It might have pressed Seoul and Canberra to be cautious in joining the AIIB. A few other actors, such as Japan and India, are wary of the strategic implications of China’s push of the OBOR idea.

For instance, Japan will not join the AIIB, worrying about its rationale, given the fact that it is already presiding over the Asian Development Bank (ADB). Though the ADB and AIIB could be complementary in elimilating regional poverty and enhancing infrastructure development, Tokyo is concerned about China’s rising leadership that could undermine Japan’s existing role. Despite the fact India is less ambitious about its own leadership in Asia, it is keen to watch what is happening in its backyard. China’s high-handed ceremony last year to launch a harbor city project in Sri Lanka has exacerbated Delhi’s concern over its traditional central role in South Asia.

To dispel some unnecessary worries, it is important to expand the understanding of the OBOR. Though the OBOR strategy has been viewed by some as Chinese version of the Marshall Plan, they are vastly different. The Marshall Plan aimed to help recover European economy after the end of the WWII, so it was a short-term program (1947-1951). Aspiring to build Eurasian infrastructure connectedness, especially in terms of highway, fast train and maritime transportation, the OBOR has to be a very ambitious program entailing a vast amount of resources through multilateral collaboration. Therefore, no single country can dominate its process. One shall not forget about the enormous differences in the Eurasian continent that promises the completion of the OBOR would take tens of years if not centuries. This adds a great amount of uncertainty in the road ahead. The case of the recently selected Sri Lanka government and its subsequent halting of the aforementioned harbor city project is a clear example.

Given the challenges, it is important for various parties to understand the OBOR well. At the outset, it is crucial to clarify that the Chinese proposal is not another Marshall Plan. The Marshall Plan, or European Recovery Program, aimed at aiding those Western European countries to ride out those chilly years, through which America could both contain the left-wing there plus the Soviet bloc and tap the opportunity to boost its own economy. However, the OBOR strategy attaches no strings and the collaborative partners are equals. It is mutually beneficial. Rather than dividing the partners, the OBOR plan shall bring Asia and Europe closer.

Indeed, China’s OBOR initiative attempts to attain a win-win, so China is not going to give without taking. As aforementioned, promoting Eurasian infrastructure interconnectedness would entail resources beyond anyone’s own treasury, so it has to be a co-paying and co-sharing business. The Marshall Plan, nonetheless, was a U.S.-giving, Western Europe-reviving unequal arrangement at a time when the recipients had no alternative. At a globalizing age, neither America nor China is the only aid provider – there are many other sources of external support, such as the World Bank and ADB, as well as other donors like Japan. It is hard for any actors to dominate Eurasian geopolitics by merely building some railroads and harbors.

China’s push has been accompanied with no preconditions. The Marshall Plan used to invite Soviet Union and Eastern European states, but with demands for economic concessions. That was why Moscow refused it and set up its own counter version, Comecon. China simply could not afford to defray all the costs of building OBOR by itself. It has to mobilize all resources from its partners and therefore share the leadership with all stakeholders.

There is room to dispel suspicion and build trust by further enhancing transparency of the AIIB institution through reducing China’s share holding, offering more leadership positions to foreign nationals, and employing international business standards. As long as a mutually beneficial cross-regional connected infrastructure system can bring about public good without allowing any single party dominance, there is no reason why such a program should not be welcome.

This article first appeared in chinausfocus.com