What is it that the Gandhis have against women: A father-daughter present their own villains 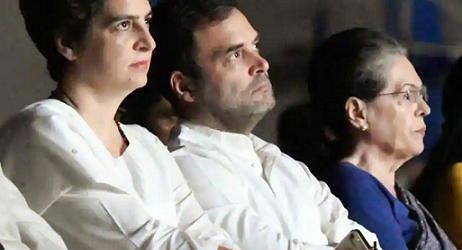 I had just picked up my morning tea in balcony when my elder daughter tapped me on shoulder. “Would BJP stop at anything? Gender, patriarchy, misogyny—what do they have against women?”

She was drawing my attention to an Indian Express news where Nirmala Sitharaman, our present finance and past defence minister, had raked up a recent brutal murder in Hoshiarpur, Punjab. A six-year-old girl child of a Bihar Dalit migrant labourer has been raped, killed and her half-burnt body was discovered this week.

My daughter wasn’t amused that Sitharaman had chosen the gruesome murder to make some political points, like “Doesn’t it shake the conscience of the brother and sister pair (Rahul and Priyanka Gandhi) who rushed to every other chosen site…as if they were going (Hathras) for a picnic…But why not in Hoshiarpur? Why not if it (the crime takes place) is Rajasthan?…the pretentious Congress is nowhere…A woman heads their party.”

I wasn’t sure the bit in Sitharaman’s words which had offended my daughter till she drew my attention to another story in Indian Express. The “rejoinder” from Gandhi scion and the chief minister of the Punjab state, Capt Amarinder Singh: “Unlike in UP,” we are not “denying” the rape or “blocking the course of justice.” Amarinder was more lyrical: He found BJP doing a “political puffery.”

Well, that might be true. With first phase of Bihar elections due in a matter of hours, parties are jostling for political points. But leave aside politics, my girl, if it is gender, patriarchy and misogyny could we please look at Congress more closely please.

Till last year Congress had a high-profile spokesperson. Priyanka Chaturvedi commanded attention on media of all kind: Print, digital, social media etc. But she quit in disgust in 2019. She felt “hurt and self-dignity” compromised when her offenders, within Congress itself, were reinstated after being suspended briefly. “I put in 10 years (for Congress)…they ignored a woman..(I had put up) at a great personal cost, self-dignity…If I don’t (quit), it would let all those women down who want to join politics, raise voice.”

More recently Khushboo Sundar, a high-profile Congress spokesperson in South, quit Congress. She said she had given up her personal life to work for Congress in last six years but she has no option but to quit as she was being “pushed and suppressed.”

Let’s say, these incidents were ambitions couched in sexist pretence, I ventured to my daughter. Let’s also not make much of Rahul Gandhi’s “Come, Rape in India” remark in the Parliament which had led to a massive uproar. Mr Gandhi thought he was being witty when he said “Come, Make in India” is more like come “Rape in India.” The fellow women Members of Parliaments were outraged for they found Mr Gandhi being cavalier about a crime which leaves a victim with two options: Suicide or a living dead.

But let’s not deny that it was the kind of remark which should make gender-activists see red. A newspaper like Indian Express ought to have initiated a debate on the mindset of India’s wannabe Prime Minister. It’s no excuse that he is still a bachelor. He has women in family, his grandma was India’s iron lady. Rape can’t be a matter of wit.

If she wants she could give this another instance a miss, I proffered by daughter. Mr Gandhi was all pompous when he had said in Parliament last year that the prime minister had “got a woman (Nirmala Sitharaman) to defend him (Modi),” on Rafale deal. It surely smacked of patriarchy. A woman who is a model to millions in this country—try to see how Nirmala makes such earnest effort to speak Hindi, good one at that—can’t be ridiculed as if it wasn’t the Parliament but some Duryodhana’s sabha.

But no apology. No reprimand from their mother Sonia who has been at the “helm” longer than even Indira. No outrange or OpEd in Indian Express or The Hindu.  And if I could ask you my daughter how do you think they ought to have reacted to “haram-khor” jibe in their own coalition-run State to a young lady who has achieved more than arguably anyone in Bollywood? Did the Gandhis mind the threat to Kangana dare she descend in Mumbai ever or when a crane made itself comfortable in her Bandra room?

It was not the BJP but the Dalit supremo Mayawati herself who was angry beyond words at how the murder and rape of a Dalit girl in Alwar was “hushed up” by the Ashok Gehlot Congress government, as there are a string of other rapes which are occurring in Rajasthan even as Gandhis lost their shirt on Hathras. And when your former chief minister (Kamal Nath) mentions a sitting woman minister (Imarti Devi) an “item” should a perfunctory disapproval by Rahul be enough to cover the silence of Sonia and Priyanka? Has there been any consequence on Kamal Nath? Has Indian Express sought out Randeep Surjewala for his reaction?

I won’t go into what happened to the “Nirbhaya Fund” of a 1,000 crore which was set up by Congress in the aftermath of the terrible incident on Delhi streets. It remains under-utilized even by the BJP states. But the larger point is Gandhis indeed are convenient on women. Debating points, highlighted by predisposed newspapers is no shield.

So, when you raise banners against gender-bias, patriarchy and misogyny my child, I told my daughter, do keep a memory log. And could I have another fresh morning tea please now?