What’s wrong if Vijayan is now stern on Onam like he wasn’t on Bakra-Eid? 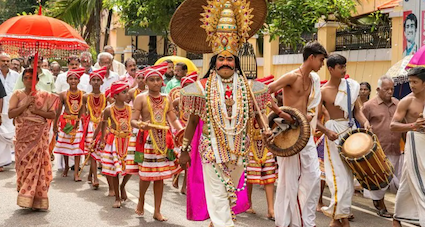 It’s an appeal to Hindus of this country not to cast truckloads of abuses on Pinarayi Vijayan’s Kerala government only because it has now asked Hindus to adhere strictly to Covid-19 norms ahead of the Onam festival (August 12).

I know those Hindus who boil with anger every morning at how they are tossed around by the establishment—Media, Judiciary and Government— with complete disregard to their faith or tradition, life or property.  But these Onam restrictions in Kerala can’t wait since God’s Own Country is throwing up over 50% of nation’s pandemic cases day-after-day and that it’s hastening the arrival of Third Wave of the virus.

What point would it serve to pour poison on Pinarayi Vijayan only because he granted relaxation in lockdown ahead of the Bakra-Eid for the faithfuls. Or that what was 14,000 cases per day on Kerala’s Covid roster has bloated alarmingly since July 21.

I suggest you to forgive too the Supreme Court which didn’t enforce lockdown in Kerala during the Bakra-Eid which Hindus had expected them to do after their stern visage on Yogi Adityanath’s Uttar Pradesh on the issue of Kanwar Yatra. Honourable Judges RF Nariman and BR Gavai are allowed to have a lapse of judgement, if that’s what you perceive. If you are contemptuous or scornful on how protesting farmers could do whatever they want on the door of Delhi, or within a shout of Supreme Court judges,  or that you don’t know a damn thing of the SC-appointed farm committee and whatever came out of their recommendations, reserve it for some other day. This is not the time when Kerala is not letting India sleep.

And lest you are thinking of filing a PIL or whatever mode is taken to approach the Supreme Court and seek a justification for what is true for Bakra-Eid is not true for Kanwar Yatra or Onam, I suggest a week with your mother-in-law for you need patience and not outrage since PILs are being dismissed out of hand these days and worse, the petitioners are being fined too.

Lutyens Media, well these paragons of humanity have scavengers to worry about; there is Arvind Kejriwal inaugurating a speed-breaker which needs half of front page for morning’s edition, right after a flyer of his ad; Gandhis bringing the disquiet in Rajasthan to order; and Mamata Banerjee has seized their imagination with Khela Hobe Diwas on August 16. And yes, of course, Pegasus which is spying on some esteemed citizens never mind their own family members are embarrassed about their credibility. For some strange reasons, they find one in Raj Kundra and his wife defending her husband and don’t find #MeToo fitting a Sherlyn Chopra or a Poonam Pandey.

Such busy lots, who are moving heavens for India’s democracy and secularism, isn’t it too much to drag them into Bakra-Eid vs Onam super-spreader debate? Haven’t you learnt anything from Kanwar Yatra vs Protesting Farmers optics? You perpetual whiners on Sabrimala vs Haji Ali; Hindu temples vs Mosques/Churches; Hindu vs Minority Schools; Mughals vs Vijayanagar; Taj vs Konark—give me a break. For there could be a theory in next morning’s edition how Hindu noise has worked up the pandemic and unleashed the Third Wave. Evidence? Well, there is always a Fauci or a Lancet customized for the occasion.

And certainly spare our prime minister from your anger. He is one against the world. He would handle Bengal at the time of his choosing. He hasn’t abandoned NRC, CAA or Farm Bills, never mind if they appear going nowhere. He doesn’t want to play the matrix of Mamata or Thackeray or Gandhis’ creation. He wants to set his own game. He is in a parallel universe of development, development and development. Besides, let’s admit, India’s middle class and English-speaking enclave don’t elect him to power. He welcomes your support but he could also do without you as long as those creased faces without flesh on frame, or chappals in feet, possibly without a home or job, and who abound in tens of millions, see a Messiah in him.

If not government, judiciary or media, who does it leave with you? Well, you have a choice, Hindus: You could either be like me and spoil your Sunday with your tea getting cold and wife yelling at a good-for-nothing husband. Or you could be your next-door neighbour who buys newspaper only for Starlets’ images and gossip; and switches on television if there is less on Raj Kundra and more on his alleged clips.

If it’s worth anything, console yourself with the reality that at least appeasers without the interest of minority at heart; seamsters and swindlers; whose crutches go with the names of ISI and Swiss banks; no longer are in power. The road to redemption in your dubious history books, owning up our temples, and even-handedness in rights to schools, is in the realms of dreams.

So be at peace with your reality, as your forefathers and their forefathers were under the Britishers or Mughal invaders. You don’t have a mention in the agenda-chart set, backed, funded and beefed for this country. It’s a rigged game, find a way to enjoy it.

(It’s a satirical Sunday piece, All for Laffs, and if it helps the secularism and democracy in our beloved country, it’s worth it).