Who’s this lady in the eye of a storm, hidden in our plain view? 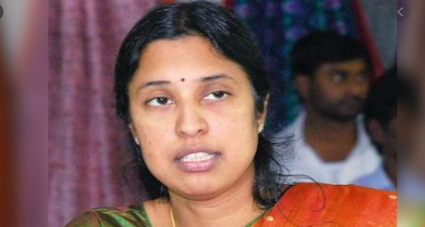 I hope I find an echo in you fellow citizens. Our redressal is with politicians, judiciary, bureaucracy, press and police: This is our system. But none of them are assuring. The only course we are left with is a collective voice. Civil society groups, who collate, discuss and act in bunch. Our indifference plays into the hands of unscrupulous.

Last evening, as I was finishing my dinner, steamed in the news that the police chief of West Bengal has been removed by Election Commission. The tainted Kolkata police commissioner Rajeev Kumar. Is still fresh in mind. As is Arnab Goswami hauled from his living room and thrown into a cellar. Our eyes have widened at Kerala chief minister Pinarayi Vijayan being named in the gold smuggling scam. Within we know, nothing would come of it.

Now we have this news from Andhra Pradesh. A bureaucrat, once arrested for her alleged role in Obulapuramu Mining Scam, is now the Special Chief Secretary albeit on an “ad-hoc basis.” Now this “ad-hoc” has as much meaning as your belief this January that having been promoted to Principal Secretary, this is as far as she would go. This was as stupid of you as to have believed in December that within a month to having been scooped out of Telangana, she would be made a principal secretary in the first instance!

But Y Srilakshmi obviously is of immense liking to the Jaganmohan Reddy government. Even the requisite approval from the Union Department of Personnel and Training has been given a by-pass. None have bothered that Indian Administrative Services rules prohibit “ad-hoc” promotions in case of pending disciplinary or criminal prosecutions.

Did all this pass without any drama? You bet, not. An objection on Srilakshmi’s promotion indeed was made in the Screening Committee meeting. It came from none less than the senior-most member in the group, Reddy Subrahmanyam. Now Reddy, an AP cadre IAS officer serving as secretary to the Government of India, wondered where is the requisite five years which Srilakshmi ought to have served as Principal Secretary before her latest promotion? Such an insolence was unlikely to go unpunished. Subrahmanyam was asked by the Jagan government to report back to his state cadre!!!

What accounts for this brazenness? For that you need to know how mired Jaganmohan Reddy’s senior, his father, a chief minister himself in his time, was in a litany of scams. You would perhaps also need to know that Jagan himself spent many months in jail for his alleged disproportionate assets. You need to catch up, I guess, a lot more on Jayalalithas and Shivakumars of South. Sometimes I feel South should be grateful for the neglect North is accused of on the region. It affords them the brazenness, the jungle rule where only claws and sabre-tooths matter.

All this should matter to us. It’s not North or South, it’s India. We can’t leave it to Press to hide it from our view. They have a lot to gain. We all have a lot to lose. Raise a muck. It’s just not a promotion, for instance. How do you think the worthy bureaucrat ought to react who has just been sidelined by Srilakshmi? Is it the road to harmony between bureaucrats and their political masters? Who suffers in this breakdown? It’s we the citizens.

So talk. Just talk. Be informed. Your newspaper won’t give you more than Rahul Gandhi’s stuck needle on “Freedom” and “Democracy” and “Constitution.” They filter you the dust while gold remains in their sieve. Spot that loot of India’s land and resources. We have nobody but ourselves to fall back upon.