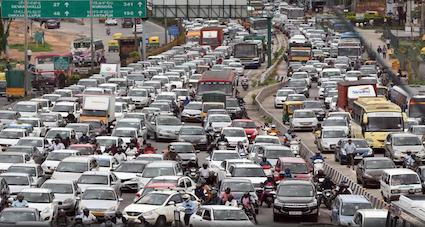 Let me start with an ending – having driven all over India for the last 50-odd years – learning, competitive, rally, transport, cars, bikes, trucks, trailers, agricultural vehicles, media, vacation and automobile testing, amongst other reasons –nothing in my whole life so far was more harrowing and stressful throughout all these road trip than the last 90 minutes during evening peak hours from Kanakkpura before reaching home in South Bengaluru on a Saturday.

Would it have been less messed up if I was driving a powerful motorcar with automatic transmission instead of an overloaded small car with manual gears? Doubtful.

Would it have been more fun for me if I had been younger and given it right back by way of competition to some of the other aggressive drivers on the road? Nope.

All over Karnataka, especially in the ghat sections, I was faced with sensible driving and politeness to others on the roads. But the moment we were within striking distance of Bengaluru, a great change took place – from the way the filling station staff responded to out-of-State cars (and were surprised when we spoke Kannada) to the way the traffic behaviour changed.

This may just be a perception, but one reason could be that the number of so-called VIP/VVIP convoys hooting past went up from zero over the last 4 days all over Karnataka to multiple times when approaching Bengaluru. The other reason could be that released from the heavy traffic of Bengaluru, or the thought of getting back into the traffic of Bengaluru, does something to the brain of otherwise decent humans who when about an hour or 90 minutes away from Bengaluru will calm down.

On our way back from Coorg to Bengaluru via Mysuru, we did not see this sort of aggressive driving anywhere, other than at the approaches to Bengaluru. Likewise in the past on the routes from Hyderabad, Chennai, Ooty and Belagavi to Bengaluru. It is as though a mass increase in blood pressure takes place behind the steering wheels of everything on the roads when they are close to Bengaluru.

I have no idea what the solutions are.

Veeresh Malik was a seafarer. And a lot more besides. A decade in facial biometrics, which took him into the world of finance, gaming, preventive defence and money laundering before the subliminal mind management technology blew his brains out. His romance with the media endures since 1994, duly responded by Outlook, among others.)