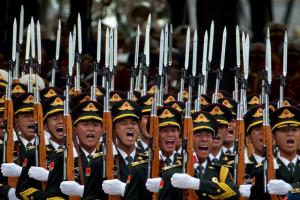 It’s a big day in China today, the most anticipated military event of the year. It would feature 12,000 soldiers, almost 200 aircraft and 500 pieces of China’s latest military gear. In full display will be the acknowledged facts: China’s People’s Liberation Army at 2.3 million-strength is today world’s largest standing army; that China is today world’s third largest exporter of arms after the US and Russia.

In attendance will be Russian president Vladimir Putin, South Korean President Park Geun-hye, South African president Jacob Zuma and Pakistan’s president Manmoon Hussain among presidents and prime ministers of 30 countries, representatives of 19 others and 10 international organisations. United Nations chief Ban Ki-moon will be present too. India will be represented by minister of state for external affairs, Gen (retd) V.K.Singh which we would touch base later in the piece.

China thus celebrates the 70th anniversary of Japan’s defeat in the Second World War. As the main eastern warfront, China suffered more tragedies than any other nation.  China’s war began in 1937, two years before Britain entered the fray and four years before the United States joined the allies. It ended with Japan’s surrender in August 1945, the war that left between 14-20 million Chinese dead and created almost 100 million refugees. Japan signed the official instrument of surrender on September 2, 1945.

Japan had made steady encroachments onto Chinese territory from 1890s onwards. But when the war was formally declared in 1937, Japan struck like a typhoon and made China’s nationalist state party under Chiang Kai-Shek to abandon its political heartland and industrial base and retreat to the ramshackle city of Chongqing in south-west China. In a desperate attempt to slow the Japanese advance, Chiang ordered the destruction of the Yellow River’s dykes, unleashing floods that killed at least half a million Chinese and displaced five million. Elsewhere in China, heavy grain taxes and the dislocation created a famine which drove some to cannibalism.

Until 1941, China resisted Japan alone. Its eight years of resistance changed the course of the Second World War. By refusing to surrender, China’s armies detained at least half a million Japanese troops which could have otherwise been deployed elsewhere.

Japan to this day has not acknowledged its atrocities in China during the war years. In China, it remains an open national wound, commemorated in memorials, museums, books, films and on television. Chinese demonstrators regularly take to the streets against Japan’s lack of acknowledgement and its claims on disputed islands in the East China Sea.

You would’ve expected West to stand by China in this seminal moment of celebration which is as much their own victory. Instead, the United States, Canada and Germany will only send representatives from their diplomatic missions in China while France and Italy will send foreign ministers. The only head of state from the EU is Czech president Milos Zeman.

But this was only expected given how West declined to attend Russia’s similar World War II celebrations in May earlier this year.  The viewpoint offered by West is that such display of military might on such celebratory days is hawkish and undesirable for democratic nations. Their stance is: only authoritarian regimes do so in order to flex their muscles.

As usual Shen Dingli, the distinguished vice-dean of the Institute of International Studies, Fudan University, offers his cutting-edge logic to the matter:

“In the context of World War II, last year France observed the 70th anniversary of the Normandy landings in May this year.

“Poland and Russia separately commemorated the 70th anniversary of the end of World War II and the defeat of Nazi Germany.

“It is not true, however, that “democracies” don’t flex their muscles and Western countries don’t commemorate anniversaries with military parade. India, often called the “biggest democracy” stages a military parade on its Republic Day every year, and US president Barack Obama graced it this January.

“Also the 70th anniversary of the end of WW II saw a number of “Old European” and “New European” countries organize activities to recall the horrors of war and the suffering of their people. France and Poland did so, though they didn’t organize military parades on a large scale.

“And soon after the WW II ended, the US staged military parades, it did so again in 1991 after the success of Operation Desert Storm in Iraq.

“Therefore, Western and non-Western countries both reflect on their past through commemorative activities and stage military parades to show their resolve to defend their territories and peoples — the US has done that, USSR/Russia and France did it, India does so and now China will, on September 3,” says Dingli who is also a founder-director of China’s first non-government-based Program on Arms Control and Regional Security at Fudan University.

The military parade is a push, believes US Defense Department, towards producing an arsenal with the “potential to reduce core US military technological advantages.” It believes China’s growing naval might could spur the region’s largest military build-up in decades around the disputed East China Sea and South China Sea.

It sure sets the stage for Chinese president Xi Jinping’s first state visit to the United States later this month. It’s one of the most anticipated events of the year.

We must end with India’s tepid response to the military parade. India has sent a junior minister in General (retd) V.K Singh and refused to send a military contingent to take part in the parade though 17 other countries, including Russia, are sending 1000 soldiers to march at the parade.

Indeed in May, President Pranab Mukherjee had gone to Russia on a five-day visit when Moscow was marking its own commemoration of World War II. On that occasion, India had sent an armed forces’ contingent to take part in the military parade.

China too had sent an invitation to president Mukherjee for its military parade as is the protocol but the offer wasn’t taken up. Clearly, India is afraid to step on to Japan’s tail which it sees as an important destination for its foreign investments. India would do well to remember what author Rane Mitter has asserted in his brilliant book: Forgotten Ally: China’s World War II. “A pacified China (in World War II) could have made the invasion of British India much more plausible.”

It’s for India to decide whether it wants to snuggle up to the imperialist powers or strengthen China’s hands for pan-Asianism that alone could provide security to the continent, presently coming apart from the seams due to terrorism, extremism and NATO’s footprints.