Why nobody is allowed to criticize Sonia Gandhi 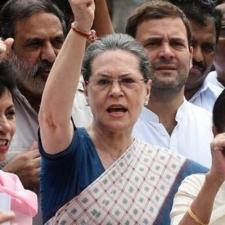 “To learn who rules over you, simply find out who you are not allowed to criticize“ — Voltaire

Take a deep breath and reflect who you are not allowed to criticize in India. I could think of no other than Sonia Gandhi, former Congress and UPA chairperson. Run the entire gamut, pore over the worksheet of honchos of Indian media, Shekhar Gupta, Barkha Dutt, Vir Sanghvi, Rajdeep Sardesai, Sagarika Ghose etc; google as you might; dive into the archives of Lutyens Media like Hindustan Times, Times of India, Indian Express, The Hindu; Sonia Gandhi, much like Caesar’s wife, has been above reproach.

That’s astounding. I mean nobody has been the president of 134-year-old Congress longer than her (19 years); she got her party two consecutive Lok Sabha victories; a whole lot of scams were unearthed; yet not a word against her. I mean yes, BJP and her bete noire Dr. Subramaniam Swamy keep pelting her windows but that’s par for course for any opposition. But what accounts for no “black sheep” within Congress bleating ever? No media house opening its edit pages for trenchant views; no historian/academician offering critiques? No scholarly paper in JNU? No diagnosis on a person out on bail?

I do recall two embarrassing Sonia interviews, that is for any self-respecting journalist, by Rajdeep Sardesai (he kept saying “fought like a tigress,” both in 2005 and 2016), as it was for Aroon Purie on another occasion, coy and adolescent.  Yes Shekhar Gupta (“she keeps a formidable dynasty on her slender shoulders,”), Barkha Dutt (“she has made a public commitment to Women’s Reservation Bill”) have also interviewed her;  Vir Sanghvi has been profound in “Nobody-in-Nehru-Gandhi-Family-Has-Given-Kind-of-Authority-she-has-to Manmohan-Singh,” echoed by a gushing Sagarika Ghose ( “She never undermined Manmohan Singh, always backed him up”). Both Sanghvi and Ghose don’t touch upon how another Prime Minister, PV Narasimha Rao, was humiliated, even in death. And these clowns happily go toting about “bhakts” to everyone else. Phew.

Two books on Sonia immediately come to my mind. One is a pathetic account by a sychophant;  another is “Red Sari” which was unofficially banned in India for six years due to machinations by Abhishek Sanghvi, as alleged by its author.

There was though one voice of dissent which was muzzled without much ado by this “deep state” in India. Margaret Alva, a former Union minister of state and Governor, was quite scathing in her autobiography: “Courage and Commitment:” Excerpts:

“While Pilot, Prasada and Scindia got all the honours due to them as Congress leaders—with shamianas erected at the AICC to receive their remains before the last rites—PV Narasimha Rao, the tallest of them all, was denied a state funeral in Delhi. His body was not even let into the AICC compound; instead, the gun carriage carrying the former Prime Minister and Congress President was parked on the pavement outside the gates, with chairs lined for party leaders. I was shocked…ever since, I have regretted not protesting and walking away.” – On PV Narasimha Rao’s death in 2004

Alva details that she played a peacebroker between Sonia and Rao: the latter falling out probably for deciding to appeal against the Delhi High Court’s decision to quash a complaint against the Bofors case. Sonia Gandhi once retorted to Alva: “What does the Prime Minister want to do? Send me to jail?”

Alva’s outburst about the unfair ticket distribution in Karnataka led to her ouster. She was asked to resign from the post of All-India Congress Committee (AICC) general secretary in 2009. In her resignation, Alva wrote thus:

“Times have changed and for the first time I have come to feel like a misfit in an organization that I considered as precious as my own home. A look at our recent candidates lists show a distinct patter of patronages to the wealthy and rich lobbies like mining, education and real-estate…”

Just reflect on the above in line of recent Karnataka assembly elections and ponder why no newspaper or media celebrity ever brought this book out of the shelves to examine Congress’ candidates in 2018? Why Congress’ demise in the state is not looked through the prism which Alva afforded us?

As per one reviewer of the book: “Alva’s book offers an amazing insight into the maneuverings of 10 Janpath—the home of Congress president Sonia Gandhi. Without being too harsh, Alva clearly indicts Gandhi for lacking transparency in her manner of functioning, her penchant for surrounding herself with a handful of loyalists…”.

Alva was made to leave Delhi, appointed as she was governor of Uttarakhand. In her words: “Once I had made the mistake of saying: `The Alvas are the only political family to have a member in Parliament without a break for almost half a century.’ This statement sealed our fate.”

(As an aside, Alva was Governor of Rajasthan when Narendra Modi came to power in 2014. Alva describes her meeting with Modi thus: `I told him I had come to pay my respects, not plead for an extension, adding `I am not prepared to quit anytime.’ “There is no question,” He (Modi) replied. “You are doing a good job please continue where you are.” She was subsequently given additional charge of Goa and Gujarat!).