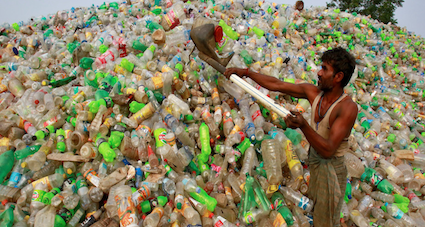 India’s ambitious countrywide ban on making, importing, selling and using some single-use plastic took effect this July but many are unsure about its implementation.

India is the world’s third-biggest producer of disposable plastic waste, after China and the United States.

Many people still defy it across the country, ostensibly because they find alternatives to plastic either too expensive or too inconvenient.

The bottomline is clear: Plastic bags can only be eliminated if the customer decides it. The seller, claim experts, has no role. And worse, the process is very slow and cannot happen overnight because India’s daily life is intertwined with disposable plastic.

Disposable plastic is considered one of the worst environmental hazards. Yet, shopping in India of all sorts is carried in throwaway bags. And then, food is served at countless places across India in single-use dishes and trays.

I sought some answers from Jeevaraj Pillai, joint president of Uflex, one of India’s top companies in the flexi-packaging segment. Pillai, a veteran of over three decades, said the challenge was immense for a billion plus nation but the move by PM Narendra Modi was most ambitious because it targeted the entire supply chain, from the making to the use of disposable plastics.

Q. The government has banned single use plastic. India has set an ambitious target to fight plastic pollution. But much of it remains on paper.

A.  Let us look at the ban through a consumption lens. This way we will be able to analyse the implementation more judiciously :

The single largest consuming single-use item is the carry bag. The government started bringing this under the regulation of the PWM rules from 2016 by increasing the thickness of the material, with a view to convert the use of carry bags from a single to a multiple-use concept. The increased thickness presumably would allow multiple usage of the carry bag by the user. The idea of increasing the thickness was also supposedly meant to act as an enabler for the rag-picker to pick it up for recycling as the weight of the bag is proportionate to its thickness and thereby creating an economic sense for collection.

With every amendment to the Rules, the thickness was increased. This is now increased to a decent level of 120 microns thereby converting its use from single to multiple. Hence it would not be proper to use the word “BAN” for this largest consuming single-use plastic product in our country. Having said that, these restrictions are only partly implemented as you can still see thinner carry bags floating around. The industry has also been condoned on the restrictions on the thickness if it is using a compostable material for making or selling of the carry bags. Despite such favourable conditions the industry should focus on compliance. The enforcement of the restrictions are difficult because of the sheer size of the Industry and the out-reach the product has in our daily lives.

There are 19 items listed for Ban, which are purely convenience plastics like Plastic glasses, forks, spoons, plates etc., from the 1st of July this year. Although we are already in the middle of the ban, we still see these single use plastic items in many places. Few of the large consumption items like straws, ice-cream sticks, candy sticks and earbud sticks are supplied by large  multinational companies which have already started implementing this by switching over to Paper or compostable substitutes. This would provide a big impetus to the implementation of the Ban.

The worrying part though remains for items like Paper cups, cutlery items, plates etc., largely manufactured by the unorganised or the informal sector.

So from a consumption point of view the implementation looks feasible in real terms. However, the challenge is to implement this over the entire spectrum of items listed for the ban, especially those produced by the informal sector.

A: Following enablers would go a long way to supplement the Ban:

India has banned the manufacture, import, stocking, distribution, sale and use of identified single-use plastic items, which have low utility and high littering potential. Plastic bottles, sachets, plastic plates, plastic spoons: Can all of these be replaced overnight?

Q: I am still not getting the answer. You take my plastic bottle away, what will I get in return? A glass bottle? Can we make such changes overnight? In Sikkim, the government has banned plastic but it is a herculean task to get a bottle to drink water. So, implementation remains an issue, right?

A: Plastic bottles are not banned in the country, except Sikkim. Some states like Maharashtra have banned size less than 200 ml.

Essentially pet bottles are covered under EPR which stipulates the Brand owner to collect what they sell in the market. Since our country has a very poor collection infrastructure, Govt. has provided a scaled-up time frame for 100 % EPR compliance.

Changing over to Glass or tin-can as a substitute is considered by the Brand-owner only as a EPR avoidance mechanism. This is highly unviable and un-implementable. Glass is not at all an Environment Friendly material. It consumes multiple times more energy in its manufacturing process compared to plastic bottles. It is recommended to spend resources in EPR-compliance rather than choosing an unfriendly substitute.