Why the World has not joined the West in Sanctions against Russia? 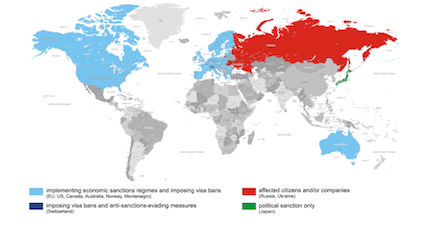 Why most of the world hasn’t joined the West’s Fest of Sanctions on Russia?

A look at the map above would tell you a blank response from Latin America, Africa and Asia. (But for Japan, South Korea, Singapore and Taiwan.)

Why is it so when141 of the 193 nations in the United Nations “deplored” Russia for its military operation in a “sovereign” Ukraine?

One, Nations needs goods to live by;

Two, the United States scares them by its unilateral stances.

Let me try to put it as simply as I could.

Not only masses need to know, it’s also important you spot the sold media which betrays you with all its lies and fabrications.

What are the goods in which US-West are no help?

Let’s start with the basic wheat.

A country like Benin is 100 per cent dependent on Russian supplies at reduced price.

Now Benin of course won’t register in your mind. It’s an African country which has more land and more population that two-thirds of Europe. All your Belgiums, Denmarks, Greece, Portgual, Ireland, Czech, Switzerlands, Swedens, Irelands pale in comparison. Even the New Zealand, which fills our news pages, has less population than Benin.

No less than 25 African countries depend on Russian wheat.

The agriculture wealth—which stretches from the Mediterranean to Pacific—accounts for more than half of the world’s wheat production; almost 85% of world’s rice production.

It might be common knowledge that Middle East, Russia and Central Asia have 70% of the world’s known oil reserves and nearly 65% of the known gas reserves.

But you could be unaware that your semi-conductors, and microelectronics, are dependent on elements such as silicons which, two-third of them, is supplied by Russia and China.

Your magnets, batteries; jacks to laptops etc which rely on rare earths such as yttrium, dysprosium, terbium etc, alone are produced by China.

Could you dare to hurt Russia and hope its blood-brother China would turn a blind eye to it?

Global South, Africa and least developed nations of the world would be wrecked if their is food and energy shortage, inflationary recession would set in and a civil war would loom on the horizon.

But They Can’t Buy The Russian Goods Anyway Due To West’s Sanctions?

Isn’t that what Sanctions are meant to? That is to isolate Russia—nobody trades with them; their Roubles currency is reduced to junk.

There are alternatives in the real world.

Like PetroDollar, this world also exists in India-Yuan,Saudi-Yuan, Rupee-Rial exchange.

Then there are Special Drawing Rights (SDR) which is a new digital currency, dynamically revalued against a basket of trade currencies and commodities.

The SDRs as a reserve currency was announced by the Eurasian Economic Union (EEU) earlier this month.

Don’t get the impression that it has come out of blue. It’s acceptance in international trade has been there for sometime now.

In 2016, World Bank issued its first bond of SDRs;

In 2019, all Central Banks began reporting their foreign exchange reserves in SDRs;

This hopefully answers the first part—why the World has stayed away from West’s Fest of Sanctions.

Now let’s address why the World is scared of US’ unilateralism.

Why the World is Afraid of the United States?

We all know that the United States, and the West which follows in its footsteps, has come down hard on Russia assets in their lands.

Russia’s assets, from gold to investment to real estate etc—as well as of their tycoons—have been frozen by the US-led sanctions.

These of course are ILLEGAL SANCTIONS, unapproved by the United Nations, its conventions and laws, as well as some 29 resolutions of member-states demanding abolition of such harsh coercive measures.

(I would take up the illegality of sanctions in a separate post.)

So these sanctions on Russia are not standalone measures.

The US has a legacy on such robbery: Iran lost its assets when Shah was overthrown; then it was the turn of Afghanistan; Venezuela has its gold denied by the United Kingdom and now its the turn of Russia.

It hasn’t gone unnoticed to the rest of the world that such is the distrust of US, and the havoc it could cause if you don’t agree to their policies, that even Germany is flying back its gold deposited with Fed Reserves back home in planes!

Those who run nations know, and we media brain-washed citizens don’t, that 143 of the BIS (Bank of International Settlements), EEU, SCO, ASEAN, RCEP nations—none of which has US as member and Russia is in all of them as member/correspondent—find Dollar toxic.

And that Dollar isn’t free from government’s manipulation, currency exchange, sanctions and embargoes.

Could you fault the world if it feels insecure of their holdings in US banks, US treasury bill etc? On what they had thought to be their most secure savings?

For the last 50 years, since 1971, the world had held Dollar to be supreme. It was that year when US declared it didn’t need gold as a collateral guarantee for its Dollar. The world held dollars, i.e. bought US treasury bonds, to finance the US budget and balance of payment deficit.

Now if the world fears it is hostage to Dollar, could we fault them?

I could dwell on why Africa considers Russia to be a “good friend” and a “reliable ally” since the days when they fought colonialism and imperial rule and thus can’t bring themselves to issue sanctions against Moscow now. But let’s move on to Europe which has shot itself in foot in joining the United States in sanctions.

For Europe could be shut down tomorrow if Russia wants so. And its just not the gas supply. Why, knowingly, Europe is walking into a ring of fire? Why are they risking suicide when all they need to do is to agree to Russia that Ukraine won’t be part of NATO?

Watch for Part 2 of this 3-part article tomorrow.