Why this anti-Muslim propaganda against Modi is such a lie 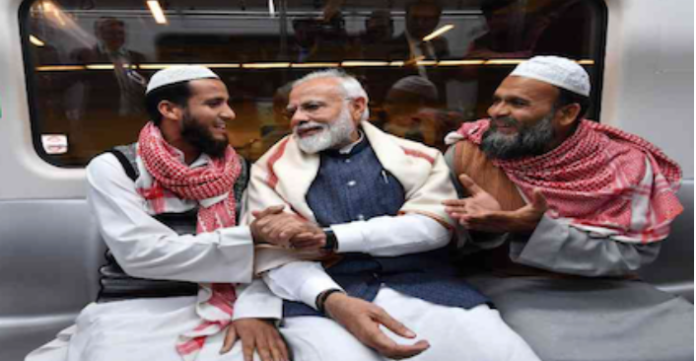 How much anti-Muslim prime minister Narendra Modi is?

This is a narrative which Left-Liberals and their lackey Lutyens Media has embedded in nation’s psyche despite evidence to the contrary. The country appears polarised and all blame is put on Modi’s cart, and Hindutva, when it all flies in the face of logic. All those Hindus and Muslims, who feel India is polarized, ought to reach out for the collars of this sickular cabal instead of pointing fingers at Modi.

A new data reveals that the Modi government is giving more educational scholarships to Muslims than Congress ever did. Between 2014-2019, Modi distributed scholarship to 2.37 crores Muslim students which was 2.33 crores under the UPA-II regime.

But this is not new. This demonisation of Modi has been on since the Gujarat Riots of 2002. The agenda ignores these facts below:

And as for the official hounding, well, the probe on Gujarat Riots was taken over by the Supreme Court after 2002. There was Nanavati Commission, and there was a SIT which had Modi deposing to them for hours. We all know how Modi was honourably cleared off the charges.

It’s an interesting analogy for Modi-baiters to remember that Modi was subsequently thrice elected as chief minister of Gujarat. But there was not a single Hindu-Muslim riot in his tenure subsequent to 2002—not once. And that his critics have to go back to 2002 to find anything which could botch his image.

And this is because Muslims in Gujarat are aware of Modi’s sensitivity towards them. His house in Vadnagar is surrounded by Muslims. Two of high-density Muslim districts, Kutch and Bharuch, rose spectacularly under Modi’s stewardship.

Kutch, a “Registan” was largely called “Pakistan” because of Muslim predominance. Tourists hardly visited it. But after Modi, it has flourished on agriculture; industries abound and today it’s a vibrant tourist destination. Bharuch was similarly infested with law and crime issues. It only made headlines due to its various curfews in the 80s-90s. No longer. Quite a few Muslim institutions, Sarkhez Roza and Sidi Saiyeed Mosque in Ahmedabad; Hajipir Dargah in Kutch, bear little resemblance to their ramshackle existence of earlier decades. They are vibrant today and encourage both faithfuls and visitors to visit these sites.

If Modi doesn’t appear friendly to Muslims, it’s because he detests appeasement. And it’s this mollycoddling by Left-Liberals, for selfish yields, which doesn’t allow Muslims to wake up to reality. They don’t reckon that the development schemes and subsidies are being offered to all eligible Indians without any discrimination. It’s not as if water, health, infrastructure, electricity, toilets are being offered to everyone else but Muslims. Triple Talaq Act has been a landmark judgment for Muslim women which ought to have been welcomed by all but has been distorted into a hate-Muslim narrative by this gang. This gang has been incessant in raking up the fear and anxiety of Muslims, through CAA/NRC, pushing the Crime-Against-Muslims narrative, when data reveals that such incidents, if anything, are less under Modi’s tenure than was the case in previous decades.

The irony is, Muslims would adore these Left-Liberals but hate Liberals within own community who could see that fundamentalism, lack of education, pre-modern attitude hasn’t helped the community in decades since the Independence.

If this polarization is to end, Indian Muslims need to appear inclusive and shun these Left-Liberals who have done little for them in all these years. By sticking with them, they are alienating themselves from the rest of India which is waking up to the chicanery of this gang and their foreign promoters. There is no way these Left-Liberals would return to power in near future. Indian Muslims would be better off, and so would be the country, if they choose modernism over fundamentalism, loosening the grip of Owaisis and Yadavs, and Mullahs, and look to mainstream rather than ghettoize themselves in the company of these unworthy.