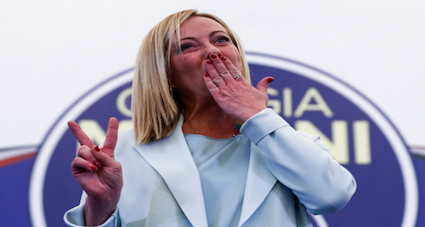 The European Union (EU) has been hit in the gut—as if Ukraine is not one already—after a far-Right alliance won the elections in Italy on Sunday and Giorgia Meloni of Fratelli D’Italia (Brothers of Italy) would be the prime minister in a month’s time.

(There is a lot which our readers would identify in the piece with Modi’s India which has similarly been in the crosshairs of forces who hate India’s rise and assertion of identity.)

It’s been a particularly bad spell for the EU, the unelected bureaucratic body, which has been spewing venom on Poland and Hungary who have veered towards Right, not to say the recent results in Sweden that has brought a similar government to power.

The Czech Republic is headed the same way due to rising inflation and soaring energy prices and France and Bulgaria are not too far behind in falling for Right-wing parties.

One could thus understand why European Commission chief Ursula von der Leyen lost her cool ahead of Italy’s elections and threatened “we-have-tools” to bring in line those who don’t usher in the government to Brussels’ liking.

Why is it that democratically elected governments are falling foul of European Union who apparently espouse the cause of “liberalism?”

Well, its now well-known that slogans of “freedom”, “equality”, “immigrants” and “rights of minorities” are peddled by the West to push for “globalization” which is nothing but a tool to loot a nation’s resources, divide the society on gender, homosexuality, and religious faultlines; to enrich 1% at the cost of 99% of rest of humanity.

However, the so-called “Right” governments put the nation first, root for family and traditions, culture and religion and put people ahead of the cartel of global powers.

At the end of the Second World War in 1945, more so at the end of Cold War, these globalists used its servile media to define any expression of nationalistic and traditional fervour as “Fascists” to ensure its demonised and never gain popular support.

It’s another matter that the West in the past has supported truly fascist regimes in Spain and Portugal and supported Right-wingers in Greece during its civil war in 1946-49, not to say having backed a right-wing military coup in 1967.

The truth is, Right rises when economy collapses. It was as true of Hitler’s Germany in the aftermath of First World War as it is now. Masses are seething under the economic burden and joblesslness. They suspect that that “Green Agenda” is meant to wean Europe away from Russia’s energy supply, never mind if millions of lives perish in the pursuit. They suspect the flow of immigrants inside the national borders is meant to divide the society permanently so as to rule them forever. That the austerity measures, permanent wars of the NATO is pushing humanity towards extinction.

Look at the United States: Its taxpayers payu up $1.5 billion a month to Ukraine which could very well ease the domestic pain of soaring fuel prices and inflation; it could alleviate the low wages and homelessness of over a half a billion people. But Washington prefers proxy war in Ukraine over its people. Or the designs it has on Taiwan as if blowing up the planet is par for course.

This chimera of equality was once well defined by a French journalist Anatole France in the 20th century:

“The law, in its majestic equality, forbids the rich as well as the poor from sleeping under the bridges; from begging in the streets and from stealing bread!”

Meanwhile, never mind if the present surveillance system, the most pervasive and intrusive in history, watches you all the time even as it swears for your right to privacy. Or like in the case of the United States, it’s police is now militarized and its prisoners-count the most in the world.

It’s the hatred for the ruling class amongst the masses which finds a connect with the nationalist leaders. People want to be in control over their lives and punish those who have pushed them to misery. They understand that the lawfully elected governments are vilified as majoritarians making lives difficult for minorities in case they don’t suit the West, as Saddam Hussein, Muammar Gaddafi and Bashar Assad didn’t. Or like Modi is in their eye.

And now it’s Girogia Maloni in Italy who would put a check on immigrants, root for gas pipelines which the Green-agenda peddlers want to do away with, and assert the national identity over identity-less conspiracy.

I leave the readers with excerpts from her recent speech:

There is a single answer to this question:

Because everything that defines us is an enemy.

For those who would like us to no longer have an identity.

I can’t define myself as Italian, Christian, Woman, Mother, NO.

Because when I am just a number, I no longer have an identity or roots;

Then I will be the perfect slave at the mercy of financial speculators;

That’s the reason why That’s why we inspire so much fear;

Because we do not want to be numbers;

We will defend the value of human being.

Every single human being.

Because each of us has a unique genetic code that is unbeatable;

And like it or not, this is sacred. We would defend it.

We will defend God, family and country.

Those things which disgust people so much, we will do it to defend our freedom.

Because we will never be slaves and simple consumers at the mercy of financial speculators.”