You must doff your hat to Times of India 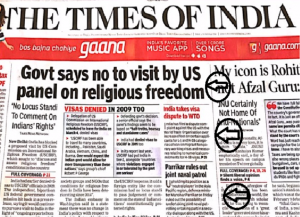 Government says no to visit by US Panel:  US Commission on International Religious Freedom (USCIRF) has been denied Indian visas to “discuss and assess religious freedom.”  (NewsBred had an insightful take on it at least four months back which you must read if India concerns you).

India takes US to WTO over visa: India has hauled US in the World Trade Organisation (WTO) over their controversial new visa rules.

INDIAN EXPRESS HAS NONE OF THESE STORIES. FROM ITS FRONT PAGE TO ITS LAST– FROM ITS MASTHEAD TO IMPRINT LINE.

May be Express, busy as it is with all its resources on Kanhaiya affair (just count on the stories in today’s editions—I gave up after 1-2 dozens), just couldn’t free its reporters on other India issues (but that’s ok, they didn’t have time and space to discuss Indian budget).

May be, Express thinks other India issues are not important. (Remember they didn’t have time for India’s win over Pakistan in cricket on its front page; instead writing a fictional “mahaul” story for which got an official rap).

May be, they genuinely missed the 3 stories since all international news agencies AP, AFP, Reuters blocked these stories too from reaching newspapers offices (I couldn’t find one in google search). Never mind if these same agencies cried themselves hoarse on India’s promised joint patrol with US in South China Sea.

The only Express story on US in today’s edition was on its business page, Pg 19:  “Monsanto threatens to exit India.”

So the facts established: Issues that India take up with United States didn’t find space in Express. Issues that United States takes up with India (like Monsanto) is a screaming headline.(Anyway, this story was Express exclusive! Kudos)

What is Monsanto? Well it’s been dubbed as the “most evil corporation on earth.” We won’t waste time here on Monsanto. Readers can take their own sweet time to find about it.

Is Express of today a one-off thing? Or has there been a pattern?

The pro-US role in Indian Express is increasingly getting established. It publishes US envoy Richard Verma, president Barack Obama, Moody’s, Ford Foundation (which had infiltrated Nehru government to the core) and Greenpeace etc on issues where these divine voices question India’s freedom of speech, tolerance etc. (Even though the world knows that US has quarter of world’s all prisoners; its horrific track record against blacks; it snooping and spying on its citizens; the Patriot Law etc probably qualifies it as a “deep state.” today).

I won’t get so far as to question how Express meets its expenses without advertisements on its pages. There must be godly-souls in this world who would do anything for “tolerance” and “freedom of speech” issues. Or for that matter the allegations of “foreign funds’ to Kejriwal’s AAP for which, it must be told to readers, it got a clean chit from none other than the Modi government last year!!! (can’t help taking a potshot: Kejriwal talks of “freedom of speech” but let’s not forget what he did to Yogendra Yadav and Prashant Bhushan—it wasn’t the best case of “freedom of speech, was it?).

Just as the JNU issue was hotting up, Modi addressing farmers in Bargarh, Odisha had said that NGOs with foreign funds were “conspiring” to destabilize his government and defame him.

Let me connect all the dots: A resurgent India would never be “allowed” by the United States. They don’t allow sovereign nations to function: they only allow vassals—such as Europe, Japan or Gulf kingdoms to exist. Look at what it does to China, Iran, Russia, North Korea and Venezuela.  Or what they did to Yugoslavia, Iraq, Libya and Syria and countless Latin American and African countries. You would be naïve to believe that imperialism and colonialism just disappeared after World War II. They only turned more sophisticated and scientific with modern technological tools.

Vajpayee broke the pattern with Nuclear explosion; Modi now is pursuing a dollar-free BRICS agenda. The empire would strike back and strike back hard.

What are the tools of those seeking world hegemony? Corporate and bought media for one; NGOs and funded foundations for another; intellectuals such as Amartya Sen (who is married into the Rothschild family); film celebrities (you know who); superbly controlled academic institutions etc.

These intellectuals, writers and elites conveniently forget that tens of millions of Asians were murdered in Tokyo and Osaka firebombing (I am not evening mentioning Hiroshima and Nagasaki), horrific liquidation of Korean civilians or killing of millions in Vietnam, Cambodia, Indonesia, Laos, East Timor and Philippines. Or what’s happening in Middle East where wars have been waged on lies of WMD and Benghazi or Syrian chemical use. So Indian elites, this is the future you have in mind for you and your children?

So a word from a neutral Indian citizen like me to the rest of the countrymen, more importantly to media: “Don’t support BJP or Congress or vice versa if that’s what you are convinced about. You support Kanhaiya—do it. You don’t want to support JNU—-don’t do it. But don’t play into the hands of such destabilizing forces.

Remember there are forces who don’t want a strong, resurgent India. Those who are blocking Muslims in their own country; who won’t allow a Muslim women to wear “hijaab” but can allow cartoons against the Prophet while taking a legal action against those having anti-Semitic views–these are not the ideal countries that you think they are. Don’t be a tool in their hands.

All they want is a polarized India. Want to test it? I can even predict a headline you would see in paid media next week/month (Ok, watch this space for my prediction in next 48 hours—my wife tells me they won’t leave you alive. Who cares).

If you have interest and safety of your children in your heart, please don’t allow such polarization forces to gather wind. A polarized society would be an ideal breeding ground for ISIS/Al-Qaeda to find its recruiters and wreak havoc on our buses, trains, monuments etc. India would become a living hell. I can foresee such a scenario if you are not alert to this agenda of foreign forces/Indian media/NGOs/academic institutions.

There are people who are after the life of me, you and our children—and they are not Hindu or Muslim.