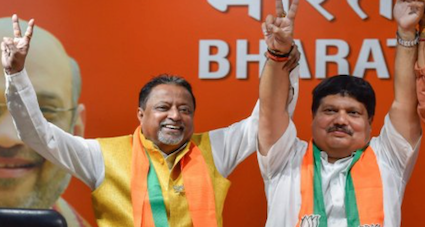 Asaduddin Owaisi casts his hat in the ring in the sixth phase of Bengal assembly polls on Thursday. His All India Majlis-e-Ittehadul Muslimeen (AIMIM) is contesting from Itahar, one of the nine seats of Uttar Dinajpur. The other three districts—Nadia, Uttar 24 Parganas and Purba Bardhaman—would also have its fate locked in EVMs, all put together 43 seats, on the day.

Itahar is intriguing to me. Uttar Dinajpur has to its shame the despicable identity in women-trafficking in which West Bengal tops in India. AIMIM is looking to claim around 52% of Muslim votes (as per 2011 Census) but if BJP could consolidate Hindu votes as a fallout, it might claim the seat to itself. Devendranath Roy of Hemtabad, who had shifted to BJP from CPM, was murdered last July for allegedly standing up against women-trafficking.

Itahar is near the border, as is Raiganj and the other seven seats of Uttar Dinajpur—-Chopra, Islampur, Goalpokhar, Chakulia, Karandighi, Hemtabad and Kaliaganj—all straddling the long Bangladesh border. The 2016 assembly polls had left the spoils shared by many parties. Islampur, Kaliaganj and Raiganj had gone to Congress; Chakulia to All-India Forward Bloc; Hemtabad to CPM; Islampur to Trinamool Congress after it was joined by sitting Congress MLA Kanaiyalal Agarwal in the 2019 by-elections.

The 2019 Lok Sabha polls left no-one in doubt about the rising graph of BJP in the district. Karandighi, Hemtabad, Kaliaganj and Raiganj voted massively for the saffron party.

I suspect Trinamool could prevail in Chopra and Goalpokhar while four—Karandighi, Hemtabad, Kaliaganj and Raiganj—could opt for BJP. The verdict is out on Chakulia and Islampur. If BJP manages to have Left’s vote share in Islampur shift to itself, it would reap dividends. Same is with Chakulia if the on-ground, inter-party dynamics flip in its favour.

In Nadia, and its nine remaining seats, Election Commission and Central Armed Police Force personnel could have a lot on its plate. Booth-capturing, poll-rigging is a nagging possibility. Needless to say, all of these nine seats are either on or near the West Bengal-Bangladesh border. Religious polarization is a real deal. BJP stands a good chance in four seats—Krishnanagar, both Uttar and Dakshin, Nabadwip and Tehatta—while it could be a close one in Karimpur, Palashipara and Nakashipara.

If BJP indeed turns up trumps in the last three-mentioned seats, it would be a reflection of consolidation of Hindu votes. These seats have long suffered from trans-border Islamic excesses. BJP is a better bet in Nakashipara than in Karimpur and Palashipara though. In Chapra and Kaliganj, Muslims, as per 2011 census, measure 60% and 58% on scale. Count on Trinamool to wrest them, aided and abetted by its men on the ground.

BJP has its star Mukul Roy in front of electorates in Krishnanagar. Very few doubt Roy’s organizing and mobilizing ability but the shadow of Chit Fund Scam also hangs large. BJP has fielded the man in his own residential locality and hopes it would be the choice of electorates too.

In Uttar 24 Parganas, out of 17 seats, BJP has set its sight high. It hopes to wrest at least 12, including a few Matua-dominated SC assemblies such as Bagdah, Bongaon Uttar, Bongaon Dakshin and Gaighata. It hopes to match Trinamool Congress punch-for-punch in Naopara and CPM in Dum Dum Uttar. Muslim-dominated Amdanga, and “border” seats of Baduria and Swarupnagar would most likely vote in Trinamool Congress’ favour.

A lot rides on Habra, and not just for BJP. It’s candidate Rahul Sinha was once its’ state unit’s president. He also had his dubious share of losing seats where BJP was expected to call shots. His opponents claim that he two-timed BJP and every time he lost, he had some new asset built for himself. BJP has adjusted its scale of trust in the man only to the extent that he was removed as party’s national secretary in September 2020. It has given the man one more opportunity to come clean in this election.

Mukul Roy Jr—his son Suhubranshu—could come up trumps in Bijpur. Seats such as Naihati, Bhatpara, Jagatdal, Khardah and Barrackpore are set to be BJP-ized. The winds were there to gauge in the 2019 Lok Sabha poll itself where its gains were substantial. A few other factors in its favour is anti-incumbency against Trinamool, Arjun Singh’s influence and campaigns which have struck a chord. Arjun Singh since 2001 had won Bhatpara for Trinamool for four successive times. In 2019 though he won Barrackpore for BJP in the general polls.

Ashoknagar too would elect BJP this year after discovery of crude petroleum there. It would be relevant to mention that Ashoknagar had elected BJP in 1999 by-election too.

In Purba Bardhaman though, the best BJP could hope is in three out of eight seats—Purbasthali Uttar, Katwa and Galsi. The remaining five are Trinamool’s stronghold. Yet, the district should interest not just political observers of the country. In Ausgram, the BJP’s SC candidate is Kalita Majhi who earns her livelihood as a domestic help. It has seized imagination for the move is for women empowerment. Professor Gobardhan Das is BJP’s candidate from Purbasthali Uttar.