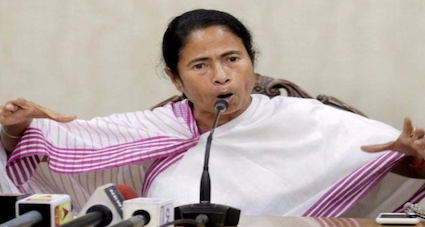 Factually wrong comments of hers often present blatant lies that apparently expose Mamata’s ignorance. While right wingers storm social media platforms laugh at those and feel ecstatic to find her on the wrong foot, do they fall to a trap of her crafted insanity and ignorance?

A politician is all about his/her image. Banerjee’s image has been carefully crafted by herself depending on public response towards her idiosyncrasies. Such comments keep her on top of mind recall and often strike headlines. She has been a leader of an audience who, in general, don’t value academic ability and wisdom. Hilarious impact of flawed comments places Banerjee a step forward towards her followers hearts.

Apparent academic ignorance on various issues yet massive political success stimulates simultaneous feeling of affection and awe in many. As Banerjee read “www dot com gov dot com” etc, it was the website address for application of Students’ Credit Card. Her typical reading-style is expected to create a strong recall value of her newly declared scheme enchanting her target audience i.e. students. As misreading the web-address has no conflict with students’ getting the credit card, she perhaps appeared childishly ‘cool’ & ‘adorable’ to many due to such crafted presentation. Flawed comments in conjugation with political super success forms a deadly combination. Had Banerjee been politically flop, her idiosyncratic comments could have been detrimental for her career. But not now.

When Bengal suffered a Dengue epidemic in 2018, the CM initially ordered the State’s health personnel not to certify Dengue in their prescriptions and suppressed epidemic-data. When compelled to admit outbreak of Dengue in the State, she held the Central Government responsible for the disease and made people laugh. After a few more days, she declared in crafted style that Dengue mosquitoes invaded Bengal from other States and hence other States were instrumental in causing Dengue epidemic in West Bengal.

Banerjee successfully dissolved public-fury a number of times into a fluid of laughter. Once people laugh, anxiety, grievance and flare of anguish disappear. Public grievance due to massive anti-CAA mayhem of December 2019 was dissolved successfully by her gibberish “CAA CAA CHHI CHHI” rant wherein she included all so called elite Bengalis of Kolkata on stage behind her. They too ranted “CAA CAA CHHI CHHI” together as per Banerjee’s instructions.

Mamata Banerjee is an intelligent, seasoned politician. Post-poll Hinducidal Bengal violence has indicated she could be insanely cruel in her political paradigm. Hence, it’s time for common people not to fall for her crafted simplicity anymore. Promotion of videos containing her idiosyncratic speeches like “www dot com gov dot com” etc. are capable of making people laugh. And possibly forget thousands of those who are living in hell, in perpetual flight. It’s time a method is spotted in this apparent madness.