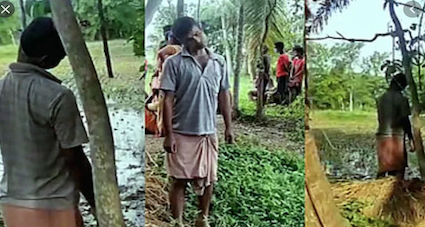 How true is the prevailing belief that the post-poll violence in West Bengal is Hinducidal in nature; and Hindus are dying as they offered blunt electoral rejection of Trinamool Congress at the hustings?

My first two pieces (here and here) lay bare the nature of Hindu preference for the Bharatiya Janata Party in Bengal polls. I took recourse to two sources: (a) Booth wise election results-published by the Election Commission; (b) Voters’ list of corresponding booths.

I would serve to illustrate my pointy a particular booth: Booth number 205 of Falta assembly constituency in South 24 Parganas.

A Bharatiya Janata Party worker, Arindam Middye (see image), was found hanging from a tree on May 16, within a fortnight of election result being out. Arindam, s/o Hiren Middye, was a voter at this booth. His name in the voters’ list was at number 870. In all there were 853 voters for the booth which given the total list of 934 implies that 91.33% came out to cast their vote.

The post-poll data reveals the distribution pattern of voters at this booth no. 205:

Now since Congress (Abdur Rejjak Molla) received 11 votes and assuming all these 11 were Muslims, it leaves 172 Muslims who cast vote. Assuming that Trinamool Congress managed 222 Hindu votes for themselves (394-172= 222), and BJP 421 votes, majorly from the Hindus, it raises a logical deduction that almost twice the numbers of Hindus at poll booth no. 205 voted for the Saffron Party.

So is Arindam Middye’s death be inferred as a political vengeance against the Hindus? I leave it to readers’ imagination.

It’s common knowledge that the writ of one Jahangir—a key Yuva Trinamool entity, headed by Mamata Banerjee’s nephew Abhishek Banerjee—runs large in this part of the State. There is a murder charge and a court order against him, and he is whispered to command enough men and weapons at his command.

During pre-election campaigns, an original inhabitant of Falta expressed thus: “There’d be no election here as Jahangir would decide who’d vote and who won’t…Hindus of Falta won’t be able to reach their respective booths.”

I had sought out Bhaktaram Mondal, another old Trinamool leader of Falta, before elections but he mostly chose to answer my questions with monosyllables and silence. I wanted to confirm if many people of different assemblies of South 24 Parganas had been displaced from their home stations so they couldn’t tun up for vote.

Now consider this: With such heavy odds of overhanging violence on their head, 421 Hindus still voted for the BJP. They silently consolidated behind BJP: winking eyes between themselves even though verbally assuring their vote for the Trinamool Congress.

Arindam of course was different. He was no silent voter but a known BJP karyakarta. His execution was a message which was not lost on anyone, least of all on Hindus of the area. Which, as I said, amounted to 62.93% Hindu votes for BJP in this booth.

This was more or less a reality in the 2021 Bengal polls. As said, some 62% of Hindu votes cast went to BJP on an average. Booth 205 of Falta is only a case in point.

It’s a fact that demography of all border or near-border constituencies in West Bengal have changed its profile due to ceaseless infiltration from across. Demography of booth no. 205 bears testimony to this assumption.

Now, Bindu, Mistry, Mondal, Middya are Hindu surnames. Not that Muslims can’t have it but at least scanning the voters’ list none of such surnames surfaced of Muslims.

Now Part A of Booth 205 had 591 electorates, containing 69 Bindus and only one Mistry while the list of Muslims numbered 154. The question is: Where did Mistrys of Mistrypara go?

Part B of Booth 205 had 343 total electorates containing 68 Mondals and 21 Middyas. Muslims were 46 in numbers.

There is a clear co-relation that the originals are thinning in the area which came to vote at booth no. 205. That outsiders are making it home. And that there is an existential threat to originals as Arindam Middye’s death could be interpreted.

If indeed a huge number of voters in booths such as no. 205 at Falta are infiltrators, what’s being done about it? Who’s responsible? What are the correctives? These are crying questions which must weigh heavy on the conscience of the Bengal government, more so on the Union of India.

( Debjani Bhattacharyya is a columnist who’s a keen observer of politics and social changes.. A communication-strategist by profession having special aptitude for analytical jackknifing of information, Debjani is a Pharmaceutical Engineer & a Management Professional by her credentials.

Analysis of data & information for generating insights for policy planning is a passion while her other significant area of interest is the Constitution of India and its interpretations thereof. She’s a voracious reader with enormous affinity towards Classics of Bengali Literature. She is an opinion-maker on social media through her  blog, twitter and facebook. )

Disclaimer: The opinions expressed within this article are the personal opinions of the author. The facts and opinions appearing in the article do not reflect the views of NewsBred and NewsBred does not assume any responsibility or liability for the same.