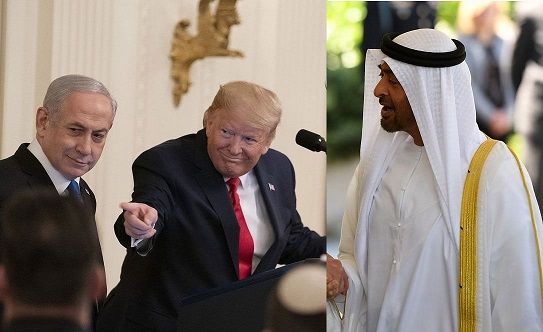 A geopolitical tsunami has hit Middle East and it has the potential to change the contours and politics of the region for decades.

Israel and United Arab Emirates signed a peace deal in early hours of Friday (Indian Standard Time) which would split open the Middle East into camps of “future” and “past.”

“Future” belongs to those Islamic states who are bound to follow the example of UAE and drop the cloak of hostility of decades against the Jewish state. “Past” is those regressive actors of the region who prefer bloodshed to keep nurturing the blood-soaked tree of hatred and enmity.

First the bare facts. The United States president Donald Trump has announced that Israel and the UAE have reached a diplomatic agreement. In exchange, Israel would suspend the annexation of occupied West Bank territory.

Israel’s embattled prime minister Benjamin Netanyahu, assailed by corruption charges, had announced that he would annex 30 percent of West Bank which has Jewish settlers and leave the remaining 70% in the hands of the Palestinian authority.

This was an improvement on the previous plan drawn by Jared Kushner, a senior advisor to his father-in-law Trump, which had outlined a negotiated settlement between the two: West Bank being divided between Israel (30% annexation) and Palestinian Authority (70%) who could set up an independent state. Palestinians lost little time in rejecting the plan.

A peeved Netanyahu then announced that he would annex the 30 percent of West Bank he had in mind for the Jewish state anyway by July 1. It set off a storm of words and finger-wagging. Egypt, Jordan and a host of other Arab states warned of consequences. The Jewish settlers in West Bank were unhappy too.

What happened next was a masterstroke. Israel turned this non-starter into something magical. Netanyahu somehow convinced Prince Mohammed bin Zayed of the UAE, nudged of course by Donald Trump, to shake hands and announce a formal deal of peace and prosperity between two sworn enemies. In return, Israel suspended its plan to annex part of West Bank.

Netanyahu could thus show his people that if he hasn’t fulfilled his plans in West Bank, he has been able to strike a historic deal with a traditional enemy. Zayed could tell his people that he was able to stop the annexation of West Bank.

It’s not just a win-win situation for both these nations. Other Gulf sheikhdoms like Saudi Arabia, Kuwait, Bahrain, Qatar and Oman would lose little time in making open what they have been doing secretly with Israel behind public glare. They would hate for the UAE to offer its financial paradise in exchange for Israel’s technological prowess—be it in agriculture, health care or in cyberspace.

The losers of course would be Iran, Turkey, Yemen, Syria and all their proxies like Hezbollah, Hamas, Houthis etc who could find themselves out in cold. The Palestinian Authority has also been dealt a body blow. It’s all Arab and Gulf allies would no longer be by its side. It is in this background that one has to view the deadly Israeli cyberattack on Iran in recent months, undeniably bolstered by its growing footprints in the enemy’s camps.

Certain expected reactions are already flowing in. The Palestinian ambassador to the UAE is being recalled over. Palestinian president Mahmoud Abbas has described the deal as “treason.” Hamas has called it “stabbing in the back of our people.”

Netanyahu meanwhile has announced his commitment to annex parts of the occupied West Bank. This is only for the consumption of his domestic audience. It won’t happen soon. Netanyahu would hope this deal with UAE would secure his place in history, like it did for Richard Nixon, battling Watergate, by opening the doors of China for the world.

It’s a marvellous news for Indian ears. India has grown astonishingly close to Saudi Arabia and UAE during Modi government’s two tenure at the helm. It had been concerned about its deteriorating ties with Iran and has watched it with alarm that the latter has fallen into the lap of China. India has also been upset by Turkey’s hostility, its president Recep Tayyip Erdogan using his acerbic tongue like a Wild West desperado does by shooting from his hips.

Better still, this deal will hurt Pakistan big time. It would force them to come out in open, in support or against the deal. It’s given it won’t support the Israel-UAE deal. It would thus only push them into more regressive elements of Islamic world. A Sunni Pakistan in bed with a Shia Iran is a delicious prospect we would await.