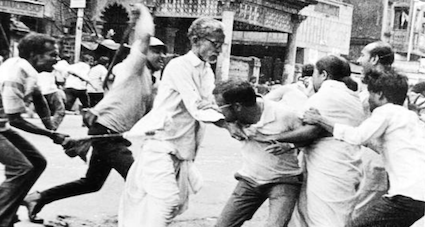 This is a game of sympathy. Mamata Banerjee has been injured. If she holds true to her promise to return to the battlefield in next couple of days, her images in wheelchair is bound to pull the strings of Bengali hearts. At least she thinks it would: Bengal’s Own Daughter, you see.

There’s a precedent too. In 1990, she had been leading a protest march in Kolkata when a CPIM goon rained lathis on her head. The doctor had claimed another blow and it could have meant “irreparable damage.”

Over the next few weeks, Mamata appeared in public with her head swathed in bandages. The result was a victory in mid-term poll in 1991 which she had lost a couple of years earlier. Her margin was significant too. She had played the card that they (CPM) wanted to get rid of Bengal’s Daughter.

It would be wrong to assume Mamata doesn’t connect. She does. She is often abusive, often childlike; often irrational, often disarming; often a fighter, often vulnerable. These are her personal cards. These have carried her for 10 years. She doesn’t bother to answer questions on infrastructure, jobs, industries, violence etc. She feels her chemistry is good enough.

Remember the time when we used to give exams in schools? We used to turn our head left and right to see how our mates were doing with their own tests. If somebody was looking around, it meant no good. If somebody was writing furiously, it mean all good. It was a kind of a barometer against our own show.

This time too the key players would be looking at each other’s copy. Election Commission plans to deliver a preliminary findings by Friday evening. BJP is asking for a CBI inquiry. Trinamool Congress is building its case at several level: Insinuation that EC’s removal of police chief was a harbinger; that BJP on March 8 itself had indicated such an eventuality; and as Trinamool MP Sougata Roy has said: There is no dent in co-driver’s door to convey it had been hit by a four-foot iron poll. Police is looking over each other’s “copy” and is busy producing its own finding which fits. As long as there is no video evidence, eyewitnesses won’t matter; Sweet shop to fetch ice won’t matter. It’s the story which must fit the crime.

This is not just One Upmanship. It’s whosoever builds its narrative credulously. First Jyoti Basu and his CPM, now Mamata Banerjee and her Trinamool Congress have harped on portraying BJP as a “dangabaaz” party. (Some cheek here for political violence for decades in Bengal has had nothing to do with BJP). An engineered violence in next few hours or days could easily be pinned on “outsiders.” Remember, Mamata has already asked people to be calm and peaceful. So whosoever breaks it, must be an outsider. Violence is a card which politicians of Bengal are never shy of using.

That’s why there is a relentless harp that BJP would never frame rules for the CAA. If it’s done, violence in ensuing anti-CAA protests is given.  I hope readers remember when bombs were hurled at Jakir Hossain, the Trinamool MLA of Jangipur, in Murshidabad last month. Trinamool pinned it on Railway Police even though security in Stations is the responsibility of the State. The Jihadi lobby also preposterously alleged that the attack on Hossain was communal and carried out by Hindi Jagruti Sangha. The case is with NIA now. Readers would spot the 1-2 likeness: First violence happens and then its’ blamed on “outsiders.” It’s easy to see who benefits.

My guess is the findings of EC, BJP—or if CBI/NIA is brought in—would run at cross purpose to what Bengal’s Police and Trinamool “unearth” in their probes. Mamata BEING injured is not sufficient in itself. Mamata HAVING BEEN injured would be the real deal.